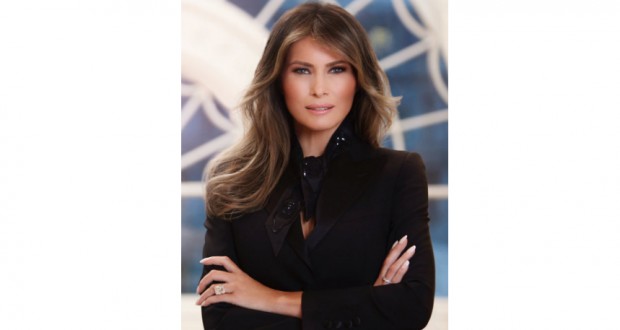 Her new press secretary, Stephanie Grisham, tweeted the news, along with a link and later the official FLOTUS Twitter account sent out the photo.

The photograph was taken in the West Sitting Hall of the White House private residence, CNN confirmed. The photographer, Regine Mahaux, is well-known for her celebrity portraiture and has taken several pictures of Trump in the past, including high-glamour editorial images.

For her official first lady look, Trump opted for a black tuxedo-style jacket, with a sequined neckerchief. Her engagement ring, reportedly 25-carats, is also on full display.

See also: Top designer has ‘no plans’ to dress either Melania Trump or Ivanka Trump.