Home / US / US Envoy: No political solution in Syria with Assad in power

US Envoy: No political solution in Syria with Assad in power

Shares
US Ambassador to the United Nations Nikki Haley said in an interview airing Sunday on CNN that until Syrian President Bashar al-Assad is out of power, she doesn't see a political solution to the conflict in Syria. 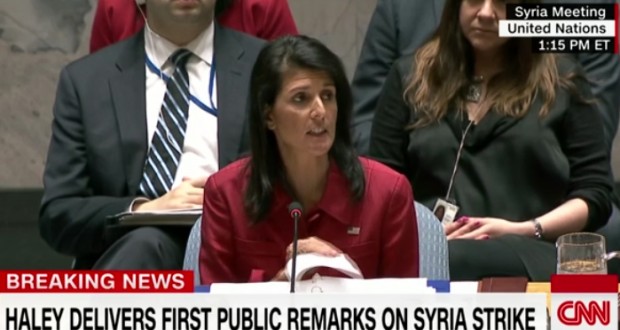 “There’s not any sort of option where a political solution is going to happen with Assad at the head of the regime,” Haley told “State of the Union” anchor Jake Tapper on CNN. “It just — if you look at his actions, if you look at the situation, it’s going to be hard to see a government that’s peaceful and stable with Assad.”

Haley’s remarks come just a day after she warned that the United States was prepared to take further actions in Syria during a special session at the UN following a US military strike against a Syrian air base.

President Donald Trump ordered the strike in response to a chemical weapons attack against civilians earlier in the week, which US officials say was carried out by the Assad government.

“The United States took a very measured step last night,” Haley said at the UN special session Friday. “We are prepared to do more. But we hope that will not be necessary. It is time for all civilized nations to stop the horrors that are taking place in Syria and demand a political solution.”

Syrian Deputy UN Ambassador Mounzer Mounzer denied the country’s use of chemical weapons, stating at the UN special session that Syria “would never use such weapons in any of its operations against armed terrorist groups.”

But Haley reiterated her statements about further actions in Syria in her interview with Tapper.

“If he needs to do more, he will do more,” Haley said when asked if Trump would order more strikes. “So, really, now what happens depends on how everyone responds to what happened in Syria, and make sure that we start moving towards a political solution, and we start finding peace in that area.”

Haley said she thought a regime change would occur because “all of the parties are going to see that Assad is not the leader that needs to be taking place for Syria.”

Haley noted that ousting Assad was not the US’s only priority.

“So there’s multiple priorities,” she said. “It’s — getting Assad out is not the only priority. And so what we’re trying to do is obviously defeat ISIS. Secondly, we don’t see a peaceful Syria with Assad in there. Thirdly, get the Iranian influence out, and then, finally, move towards a political solution, because at the end of the day, this is a complicated situation.”

“Lavrov stressed that an attack on a country whose government is fighting terrorism only plays into the hands of extremists (and) creates additional threats to regional and global security,” the post said.

On Friday, Russian President Vladimir Putin called the US strike “aggression against a sovereign state in violation of the norms of international law.”

Russia suspended the Memorandum on preventing incidents and ensuring flights safety during operations in Syria earlier signed with the United States in the wake of the US strike on the Syrian airbase, the Russian Foreign Ministry reported on Friday.