Shares
Daniel Moore of Newton Falls, Ohio speaks warmly of the stranger who appeared at his dinner table on Friday night. 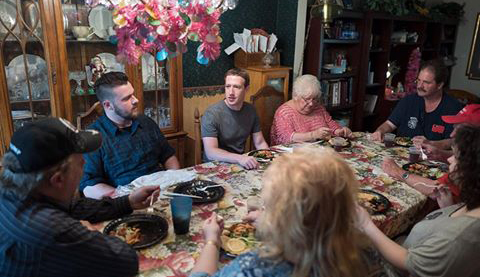 Just 15 minutes before the meal, he and his wife Lisa had no idea who would be joining them. Then the news came in – it was Mark Zuckerberg, Joinfo.com reports with reference to the BBC.

According to Mr Moore, the CEO had told Facebook staff he wanted to meet traditional Democrats who had voted for Donald Trump as president.

The Silicon Valley team got to work, and found Mr Moore – who voted for Barack Obama twice, but campaigned heavily for Mr Trump.

Mr Moore was only told that his mystery guest would be a “very wealthy philanthropist in California and 90% of Americans use his product,” according to WKBN.

They only found out his identity 15 minutes before he arrived.

Over dinner, the talk moved beyond politics, taking in the family’s work with a Ugandan orphanage.

Mr Zuckerberg, who has vowed to give away at least $45bn, suggested he could help with a fundraiser.

Mr Zuckerberg sent his thanks via his Facebook page, telling his 89 million followers: “Just got into Ohio. Thanks to Dan and Lisa Moore for welcoming me into your home for a wonderful dinner!”

Mr Moore responded in kind, saying: “Thanks so much for dropping by Mark. You’re one hell of a man.” 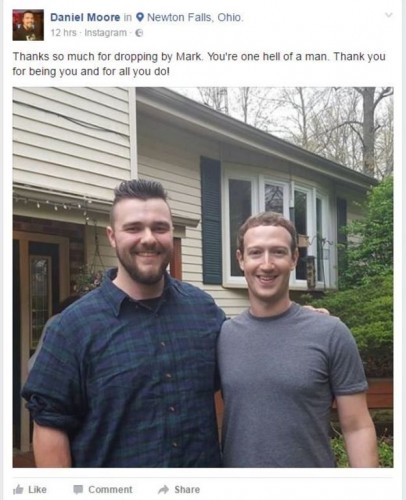 The billionaire Facebook founder is touring all 50 states after challenging himself to do so in January.

The move has raised speculation that he could be pondering a political career.

After leaving the Moores, Mr Zuckerberg went on to meet recovering drug addicts in Ohio, then travelled to Indiana for dinner with the Elkhart Fire Department.