Shares
A starving, struggling otter in Arizona was nursed back to health after utility workers plucked it from a canal on the outskirts of Phoenix. 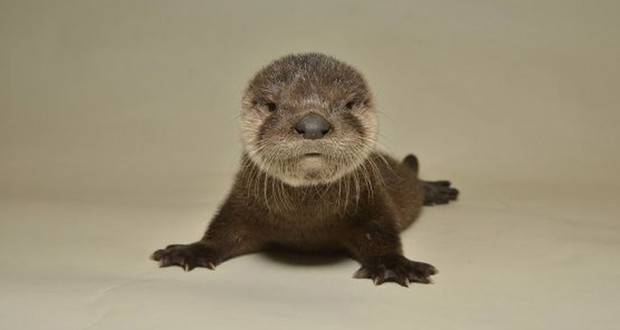 The 4-week-old animal was dehydrated and covered with fleas when three heroes from Salt River Project noticed the otter struggling to escape the drying canal, according to Mashable.

“He was calling for his momma, we assumed,” Craig Boggs, one of the utility workers, told the local Arizona news channel KPNX-TV.

“It would go back under water and fight and come back up,” he told the station. “He was about to give up. He was pretty exhausted.”

Otters were once found throughout the region in the Salt, Verde, Little Colorado, and Gila river systems, until early settlers all but killed them off. Wildlife officials reintroduced the web-footed swimmers into the Verde River in the early 1980s, and now otters are common throughout the entire watershed. An otter family is said to live near the artificial pool of water at Granite Reef Diversion Dam, which is where the baby otter possibly began its harrowing journey, according to the Arizona Game and Fish Department.

“While we don’t know for sure, it’s likely that as the canal started to draw down, mom abandoned the canal and the baby was too young to follow,” Nathan Gonzalez, a spokesman for the wildlife department, said in a press release.

After rescuing the struggling baby on April 20, the utility workers contacted the Game and Fish department, which transported the critter to their wildlife center in Phoenix. Workers fed the otter a trout mash mixed with kitten milk formula — and it was apparently just what the doctored ordered.

The otter’s condition improved, and six days later wildlife officials turned it over to Out of Africa Wildlife Park in Camp Verde, where it will live.