Shares
Former acting Attorney General Sally Yates will testify in front of a Senate subcommittee Monday about what and when she told the Trump White House in regard to Michael Flynn's ties to Russia. 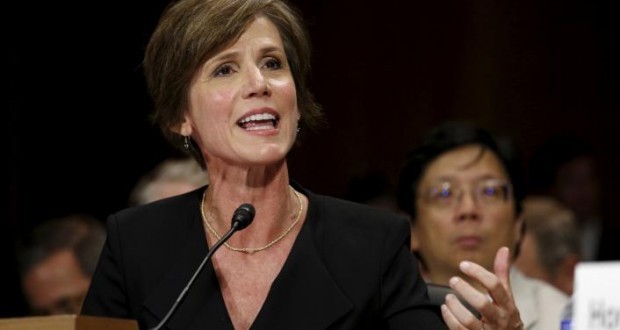 According to CNN, Yates’ testimony will push the story of the Trump campaign’s alleged ties to Russia back into the headlines, especially, if expected, she asserts that she warned Trump campaign officials that Flynn, the now-deposed national security adviser, was not telling the full truth about his contacts with Russian ambassador to the US Sergey Kislyak.

Both White House chief of staff Reince Priebus and press secretary Sean Spicer have asserted that Yates passed along information about which the White House counsel checked out and found nothing.

President Donald Trump has repeatedly insisted that the Russia investigations on Capitol Hill — and the idea that senior members of his campaign were closely involved with Russian intelligence officials — are “fake news,” a theme he kept up on Twitter Sunday.

When will the Fake Media ask about the Dems dealings with Russia & why the DNC wouldn’t allow the FBI to check their server or investigate?

He made a similar point on Monday, accusing the Obama administration of not properly vetting Flynn when he led the Defense Intelligence Agency during his predecessor’s term: “General Flynn was given the highest security clearance by the Obama Administration – but the Fake News seldom likes talking about that.”

General Flynn was given the highest security clearance by the Obama Administration – but the Fake News seldom likes talking about that. — Donald J. Trump (@realDonaldTrump) 8 мая 2017 г.

He quickly added: “Ask Sally Yates, under oath, if she knows how classified information got into the newspapers soon after she explained it to W.H. (counsel).”

Ask Sally Yates, under oath, if she knows how classified information got into the newspapers soon after she explained it to W.H. Counsel.

The problem for Trump is that there is a whole lot of smoke already surrounding his campaign and its ties to Russia — with Flynn at the center of it all. Flynn was forced to resign after lying to Vice President Mike Pence about his conversations with Kislyak, but since that time, we’ve learned he reportedly didn’t properly report a speech he gave to a RT-TV, a Russia propaganda arm, and that he was paid at least $500,000 to represent Turkey’s interests during the 2016 campaign. Late last week, The Washington Post reported that Flynn has been warned by Trump transition officials about the danger of speaking with Kislyak — a detail CNN has now confirmed.

Polling suggests there is significant suspicion regarding the Trump campaign’s contacts with Russia. In an April Washington Post-ABC News poll, 56% of those tested said that Russia tried to influence the election. Of that group the bulk — 39% — said the Trump campaign “intentionally” helped Russia’s meddling.

The CIA and FBI have confirmed their belief that Russia sought to meddle in the election and that the country’s interference was aimed at trying to keep Hillary Clinton from winning. There’s no evidence yet that there was any sort of collusion between the Trump campaign and the Russians.

The re-emergence of the Russia investigation comes after, arguably, one of the better weeks of the Trump presidency — capped by the House’s passage of the American Health Care Act on Thursday.

Depending on what Yates says — and how the White House reacts — any momentum built from last week (and I am somewhat skeptical there was much) could disappear into thin air. Regardless, Yates’ testimony — and the latest news about Flynn — is a reminder that the Russia story just isn’t going anywhere anytime soon.

Trump and his administration are clearly frustrated by the Russia drumbeat. But their dismissive approach could well come back to bite them in regards Flynn this week and potentially in the future.

Whether this President likes it or not, the Russia story isn’t going away anytime soon. Given that, he and his senior team have to figure out a better message than they’ve had to date.