Shares
A 10-year-old girl in Orlando, Florida, pried open an alligator's mouth to free her leg after the animal clamped down on her left knee, the Florida Fish and Wildlife Commission said. 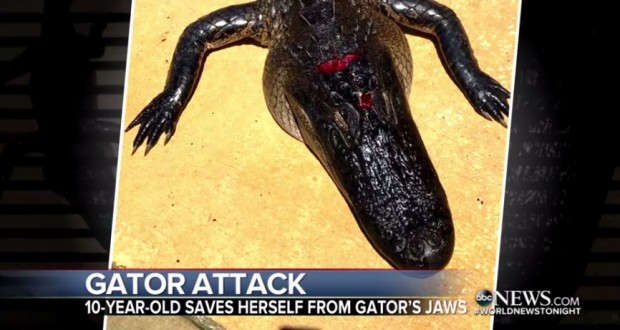 The girl was swimming Saturday afternoon in a designated swim area of Lake Mary Jane, in water that was about two feet deep and 10 feet from shore, when an 8-foot-9-inch-long alligator bit her, according to ABC News.

She was able to pry open the gator’s mouth and remove her leg but sustained several puncture wounds to the back of her knee and lower thigh, the state commission said.

She was treated by lifeguards, taken by family members to a children’s hospital and has reportedly since been released.

There were four other members of her party, standing approximately 30 feet from the shore when she was bitten, officials said.

The alligator was caught and removed from the lake by a trapper.

The lake is closed for swimming today and surrounded with yellow tape. The alligator was caught and removed by a trapper.

The Florida Wildlife Commission says on its website that some gators in the region can grow to be 14 feet long and weigh more than 1,000 pounds.