Shares
Dozens of students walked out of Notre Dame University's commencement exercise on Sunday to protest a speech by U.S. Vice President Mike Pence, who warned graduates of the prestigious Catholic school against suppressing free speech. 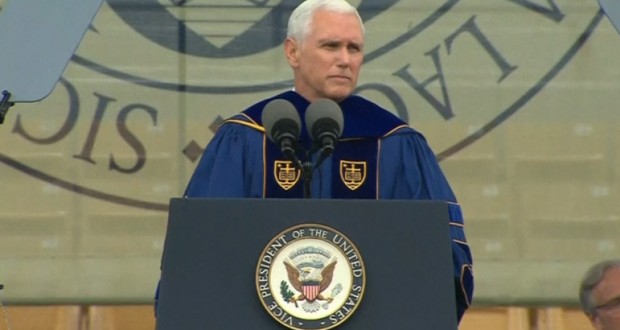 The protesters, among the thousands of graduates and guests assembled in the university’s football stadium, stood up when the conservative Republican began his speech and streamed out of the ceremony, to the jeers of some of those who remained, according to Reuters.

A few of the students had messages of protest attached to their traditional “mortarboard” graduation caps. One of them displayed an inverted U.S. flag, a sign of protest popularized during the Vietnam War era, and the words “Are we great again yet?,” a reference to President Donald Trump’s campaign slogan.

In his speech at the Indiana school, Pence squarely addressed the festering controversy of what constitutes free speech on campus, an issue that has intensified at many universities since Trump’s election victory last year.

“I would submit that the increasing intolerance and suppression of the time-honored tradition of free expression on our campuses jeopardizes the liberties of every American. This should not, and must not be met with silence,” Pence said, in an apparent reference to efforts to bar him from speaking.

Protests, some of them violent, have erupted at schools across the country in recent months to stop appearances by conservative commentators such as Ann Coulter and Milo Yiannopoulos. In at least some cases, schools have canceled the events, citing safety concerns.

Organizers of the Notre Dame protest said they wanted to voice their objections to policies advocated by Pence as part of the Trump administration and while he was governor, including a proposal to suspend immigration from some Muslim-majority countries that has so far been blocked in courts.

“The participation and degree-conferring of VP Pence stand as an endorsement of policies and actions which directly contradict Catholic social teachings and values,” undergraduate Xitlaly Estrada was quoted as saying in a statement from We Stand For ND, a group that helped organize the walk-out.

Pence, who served as Indiana’s governor before his election as vice president, also took issue with efforts at some U.S. universities to shelter students from what they consider objectionable points of view or to recommend language to be used in classes or other school functions.

“Far too many campuses across America have been characterized by speech codes, safe zones, tone policing, administration-sanctioned political correctness all of which amounts to nothing less than the suppression of the freedom of speech,” Pence told the audience at the campus in South Bend.

Pence delivered his address as Trump completed the initial day of the first overseas trip of his presidency. In a speech in Saudi Arabia, Trump called on Middle Eastern leaders to do their fair share to defeat Islamist extremists.