Shares
Two men have died in the US trying to stop a man abusing two women of Muslim appearance, Oregon police say. 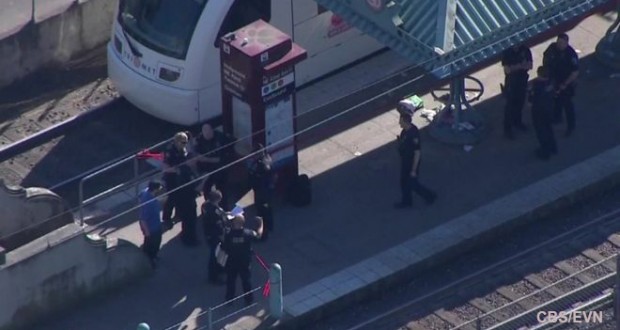 The abusive man turned on the two men and fatally stabbed them in the city of Portland, police said, according to the BBC.

The incident happened on a commuter train. Another passenger was wounded before the attacker was arrested.

The Council on American-Islamic Relations urged President Trump to speak out against increasing Islamophobia in the US.

It accused the president of exacerbating the trend with his statements and policies.

The attack took place at about 16:30 local time (00:30 GMT) on a train at Hollywood Transit Station, police said in a statement. One of the victims died at the scene, the other died in hospital.

Police have identified the suspect as Jeremy Joseph Christian, 35. He has been charged with offences including aggravated murder, attempted murder, intimidation and being a felon in possession of a restricted weapon.

“Suspect was on the train and he was yelling and ranting and raving a lot of different things, including what would be characterised as hate speech or biased language,” said Sgt Pete Simpson.

“In the midst of his ranting and raving, some people approached him, appeared to try to intervene with his behaviour. Some of the people that he was yelling at, they were attacked viciously by the suspect, resulting in the two deaths and one injury.”

Jeremy Joseph Christian was arrested shortly after he got off the train. The two women he was abusing – one of whom was said by eyewitnesses to have been wearing a headscarf – left the scene before police could speak to them.

However one of the girls’ parents later told the Oregonian newspaper that they were teenagers, one black and one Muslim.

Dyjuana Hudson said the attacker “was saying that Muslims should die. That they’ve been killing Christians for years”.