Shares
President Donald Trump on Thursday said he would withdraw the United States from the landmark 2015 global agreement to fight climate change, drawing anger and condemnation from world leaders and heads of industry. 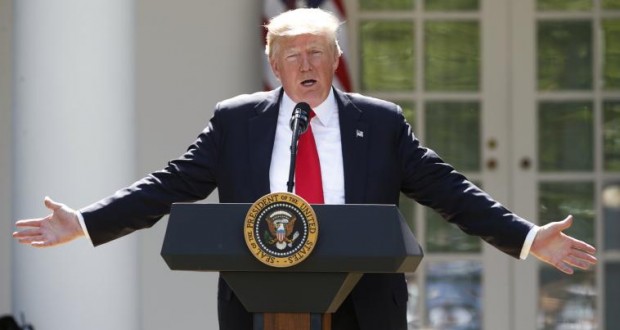 Trump, tapping into the “America First” message he used when he was elected president last year, said the Paris accord would undermine the U.S. economy, cost U.S. jobs, weaken American national sovereignty and put the country at a permanent disadvantage to the other countries of the world, according to Reuters.

“We’re getting out,” Trump said at a ceremony in the White House Rose Garden under sunny skies on a warm June day, fulfilling a major election campaign pledge.

“We don’t want other leaders and other countries laughing at us any more. And they won’t be,” Trump said.

“The same nations asking us to stay in the agreement are the countries that have collectively cost America trillions of dollars through tough trade practices and in many cases lax contributions to our critical military alliance,” Trump added.

Supporters of the accord, including some leading U.S. business figures, called Trump’s move a blow to international efforts to tackle dangers for the planet posed by global warming.

Former Democratic President Barack Obama expressed regret over the pullout from a deal he was instrumental in brokering.

“But even in the absence of American leadership; even as this administration joins a small handful of nations that reject the future; I’m confident that our states, cities, and businesses will step up and do even more to lead the way, and help protect for future generations the one planet we’ve got,” Obama added.

Trump, who has called climate change a hoax, said his administration would begin negotiations either to re-enter the Paris accord or to have a new agreement “on terms that are fair to the United States, its businesses, its workers, its people, its taxpayers.” He complained in particular about China’s terms under the agreement.

“The decision made by U.S. President Trump amounts to turning their backs on the wisdom of humanity. I’m very disappointed… I am angry,” Japanese Environment Minister Koichi Yamamoto told a news conference on Friday in an unusually frank tone.

German Chancellor Angela Merkel, French President Emmanuel Macron and Italian Prime Minister Paolo Gentiloni said in a rare joint statement the agreement could not be renegotiated and urged their allies to hasten efforts to combat climate change and adapt.

“While the U.S. decision is disheartening, we remain inspired by the growing momentum around the world to combat climate change and transition to clean growth economies,” said Canadian Prime Minister Justin Trudeau.

A summit between Chinese Premier Li Keqiang and top European Union officials in Brussels on Friday will end with a joint statement – the first ever issued by China and the EU – committing both sides to full implementation of the Paris accord.

China overtook the United States as the world’s biggest emitter of greenhouse gases in 2007.