Shares
Fired FBI Director James Comey aimed a dagger blow at Donald Trump Wednesday, saying the President had demanded his loyalty, pressed him to drop a probe into ex-national security adviser Michael Flynn and repeatedly pressured him to publicly declare that he was not under investigation. 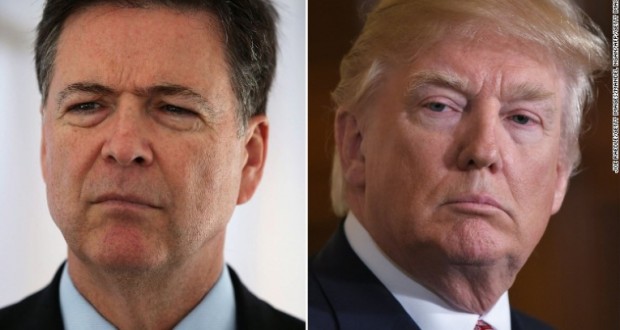 Comey magnified the political crisis engulfing the White House by releasing his opening statement ahead of a blockbuster appearance on Capitol Hill on Thursday, according to CNN.

The dramatic document sketched a stunningly detailed account of Comey’s intimate meetings with the President, included direct quotes from Trump and revealed the former FBI chief’s discomfort with the President’s behavior.

The testimony appeared to bolster the case of Trump critics who believe that the President may have obstructed justice and abused his power in his dealings with Comey, who he later fired.

Comey said that Trump asked him to drop FBI investigations into Flynn centering on his calls with Russian ambassador Sergey Kislyak during the transition, which eventually led to his dismissal as national security adviser after it emerged he had lied about the conversations to Vice President Mike Pence.

“I replied only that ‘he is a good guy.'” Comey wrote, describing a private meeting with Trump in the Oval Office on February 14, then added: “I did not say I would ‘let this go.'”

The exchange took place after a meeting between Trump and senior intelligence and homeland security officials, after which the President asked to speak to the FBI Director alone.

Comey said in his testimony that he understood the President to be requesting that he drop the investigation into Flynn, who had resigned the day before. But he says he did not understand Trump to be referring to the wider Russia investigation.

“Regardless, it was very concerning, given the FBI’s role as an independent investigative agency.”

Trump critics contended that this encounter appears to be tantamount to an inappropriate pressure on the FBI by the President, an allegation that if proven could have dire consequences for Trump’s presidency itself.

Comey’s account of this encounter conflicts with Trump’s own statements. At a press conference on May 18, the President was asked whether he had asked the FBI Director to pull the plug on the Flynn component of the Russia investigation.

“If that isn’t obstruction of justice, I don’t know what is,” Toobin said.