Home / US / Gunman opens fire on US Senators at baseball field

Gunman opens fire on US Senators at baseball field

Shares
A lone gunman opened fire on Republican members of the congressional baseball team at a practice field in a Washington suburb Wednesday, using a rifle to shower the field with bullets that struck five people, including Steve Scalise, the majority whip of the House of Representatives. 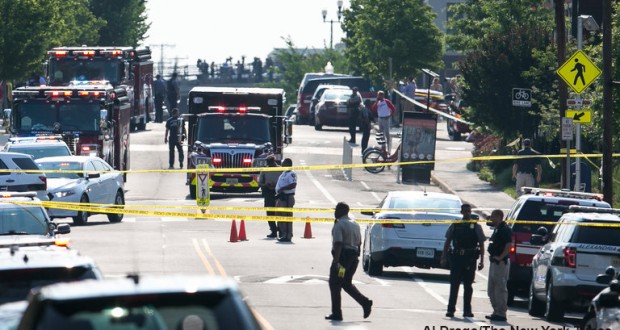 Two members of Mr. Scalise’s protective police detail were wounded as they exchanged gunfire with the shooter in what other lawmakers described as a chaotic, terror-filled ten minutes that turned the baseball practice into an early-morning nightmare. Police said a total of five people were shot, two critically, according to The New York Times.

Standing at second base, Mr. Scalise was struck, in the hip, according to witnesses, and collapsed as the shots rang out, one after another, from behind a chain-link fence near the third-base dugout. Witnesses said Mr. Scalise, of Louisiana, “army crawled” his way toward taller grass as the shooting continued.

Two law enforcement officials identified the gunman as James T. Hodgkinson, 66, from Belleville, Ill., a suburb of St. Louis. The Washington Post first identified Mr. Hodgkinson as the suspect in the shooting.

Police said the gunman was wounded and taken into custody after the gunfight with the Capitol Police security detail and local police officers, who arrived minutes after they received plaintive calls for help from those at the field. The F.B.I. said the bureau would take the lead in the investigation, treating it as an assault on a federal officer.

Witnesses described a man with white hair and a beard wielding a long gun standing behind the dugout.

“He was hunting us at that point,” said Representative Mike Bishop, Republican of Michigan, who was standing at home plate when the shooting began at 7:09 a.m. Mr. Bishop said the shooter seemed to be “double-tapping” the trigger of his weapon. “There was so much gunfire, you couldn’t get up and run. Pop, pop, pop, pop — it’s a sound I’ll never forget.”

Authorities said they could not comment on the motive for the shooting. Tim Slater, a special agent in charge in the F.B.I’s Washington field office, said investigators are “exploring all angles.” Asked whether the shooting was an assassination attempt, he said it was “too early in the investigation to say one way or another.”

Aides to Mr. Scalise said Wednesday morning that he underwent surgery at MedStar Washington Hospital Center and is in stable condition. Police said a total of five people were transported to hospitals.

A friend of Zachary Barth, a staff member for Representative Roger Williams, Republican of Texas, posted a message from Mr. Barth on Facebook saying: “I got shot this morning at the baseball fields. But I am in the hospital and ok. Thank you for the thoughts and prayers.”

Representative Mo Brooks told CNN that “at least five” people were injured — including two law enforcement officers and a congressional aide — while members of a Republican congressional baseball team were practicing.

Mr. Brooks said the gunman, who had a rifle, said nothing as he opened fire. At least 50 shots were fired, congressional sources said.

The police said the gunman was shot and wounded and taken into custody.

The White House said in a statement that President Donald J. Trump and Vice President Mike Pence were made aware of the shootings.

“We are deeply saddened by this tragedy,” the statement said. “Our thoughts and prayers are with the members of Congress, their staffs, Capitol Police, first responders, and all others affected.”

Rep. Steve Scalise of Louisiana, a true friend and patriot, was badly injured but will fully recover. Our thoughts and prayers are with him.