Shares
An American university student who was returned to the United States this week after being held in North Korea for 17 months has a severe brain injury and is in a state of "unresponsive wakefulness," doctors said on Thursday. 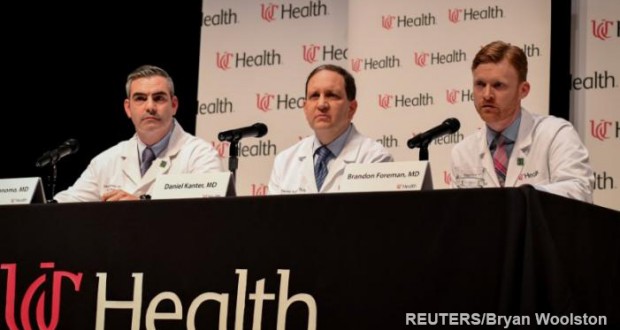 Otto Warmbier, 22, who arrived in the United States on Tuesday, is stable but “shows no sign of understanding language, responding to verbal commands or awareness of his surrounding,” said Dr. Daniel Kanter, medical director of the neuroscience intensive care unit at the University of Cincinnati Medical Center, according to Reuters.

“He has not spoken,” Kanter said at a news conference. “He has not engaged in any purposeful movements or behaviors.” He said Warmbier was breathing on his own.

Warmbier, from Wyoming, Ohio, has been in a coma since March 2016, shortly after he was sentenced to 15 years of hard labor in North Korea, his family said on Tuesday.

He was arrested for trying to steal an item bearing a propaganda slogan, North Korean media reported. He was visiting North Korea with a tour group.

On Thursday, North Korea said that it had released Warmbier “on humanitarian grounds.”

The University of Virginia student’s father, Fred Warmbier, said at an earlier news conference that his son had been “brutalized and terrorized” by the North Korean government.

Fred Warmbier said the family did not believe North Korea’s story that his son had fallen into a coma after contracting botulism and being given a sleeping pill.

Doctors said on Thursday that there was no sign of botulism in Otto Warmbier’s system.

Kanter said that Warmbier had suffered “extensive loss of brain tissue in all regions of the brain,” but he declined to discuss Warmbier’s prognosis at the request of his family.

While doctors are uncertain as to what exactly caused the condition, cardiac arrest that stops the flow of blood to the brain is generally seen as resulting in the death of brain tissue.

Cardiac arrest in young, healthy people is rare and generally caused by either intoxication or traumatic injury, Dr. Jordan Bonomo, a specialist in neurosurgery and neurocritical care at the University of Cincinnati Medical Center, said at the news conference.

Although doctors had no information about the type of medical treatment Warmbier received while in North Korea, they did receive MRI images from North Korea dated April 2016, Kanter said. Based on those images, doctors estimate the brain injury likely occurred in the preceding weeks, he said.

Doctors said there was no evidence that Warmbier suffered any broken bones.

On Thursday, the State Department said that its special envoy on North Korea, Joseph Yun, who negotiated Warmbier’s release during a visit to the country this week, had also met with three other U.S. citizens being held in North Korea.

Tensions between the United States and North Korea have been heightened by North Korean missile launches and two nuclear bomb tests. Pyongyang has vowed to develop a nuclear-tipped intercontinental ballistic missile capable of hitting the U.S. mainland.

Fred Warmbier said he was stunned when told of his son’s condition one week ago.

“I don’t know what being in shock is, but I’m pretty sure I was,” he said.

“There is no excuse for any civilized nation to have kept his condition secret and denied him top-notch medical care for so long.”

He said his wife, Cindy, had not left their son’s side since his return to the United States and that he had spoken with U.S. President Donald Trump on Wednesday night.

U.S. Secretary of State Rex Tillerson told reporters on Thursday, “We’re glad he’s home.” He said officials would not comment on Warmbier’s health or how he came to be in his current condition.

Tillerson said on Wednesday that U.S. officials were considering some type of travel visa restriction to North Korea.

U.S. lawmakers introduced a bill last month that would ban U.S. citizens from traveling to North Korea as tourists and require them to obtain special permission for other types of visits, following the detention of at least 17 Americans there in the past decade.

In Wyoming, a northern Cincinnati suburb of about 8,000 people, Warmbier’s return to the United States was marked by blue and white ribbons, representing the colors of the local high school, tied around trees and telephone polls.