Home / US / Trump: I did not make recordings of Comey

Trump: I did not make recordings of Comey

Shares
US President Donald Trump did not record his conversations with fired FBI Director James Comey, he tweeted on Thursday, ending weeks of speculation kick-started by the President himself. 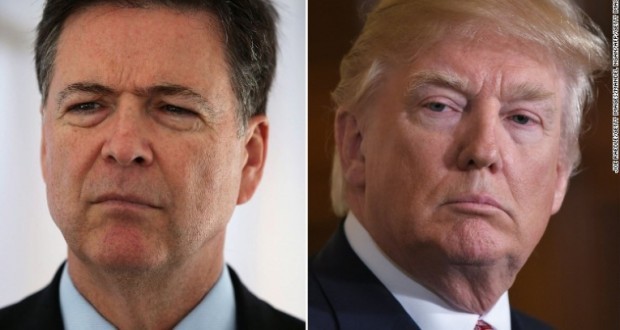 The statement ended speculation about whether the President recorded conversations in the Oval Office, according to CNN.

Comey, who Trump fired last month, said he had hoped there were recordings of their conversations.

“With all of the recently reported electronic surveillance, intercepts, unmasking and illegal leaking of information, I have no idea whether there are ‘tapes’ or recordings of my conversations with James Comey, but I did not make, and do not have, any such recordings,” Trump tweeted.

…whether there are “tapes” or recordings of my conversations with James Comey, but I did not make, and do not have, any such recordings.

Trump, perhaps attempting to insulate himself from blame, suggested in Thursday’s tweets that some surveillance could be happening, but that he was not aware of any such attempts.

Trump tweeted on May 12, in response to a New York Times report about Comey’s dinner with Trump, that Comey “better hope that there are no ‘tapes’ of our conversations before he starts leaking to the press!”

Trump and his top aides have played coy for weeks about the possibility of White House tapes, treating their possible existence like a game show reveal.

But the tweet had serious repercussions for the President: The fired FBI director testified earlier this month that Trump’s message caused him to leak the bombshell content of a memo to the media through a professor at Columbia University.

A senior administration official said Thursday that it became clear Trump had to come clean on his lie about the Comey tapes before the Friday deadline set on him by Congress to hand over any recordings.

The official, along with a Republican who talked to Trump this week, said the President has been amused at all the obsessing over this.

In hindsight, however, the Republican close to Trump called the episode one of worst things the President has done, with fallout that led to the appointment of a special counsel.

“If he doesn’t regret this, he should,” said the Republican associate, who spoke to Trump this week.

White House officials had been unable to confirm the existence of a recording device for weeks. Trump said earlier this month that reporters would be disappointed by the answer.

White House spokeswoman Sarah Huckabee Sanders told reporters earlier this month that she will “try to look under the couches” to determine whether there is a recording system.

Trump has a history of using the prospect of audio recordings to intimidate people close to him.

Tim O’Brien, a Trump biographer, told CNN’s Brian Stelter on “Reliable Sources” earlier this month that Trump told him during interviews that he was recording their conversations. But that when the former business magnate sat down for a deposition, Trump “essentially” said he used the threat of tapes to “intimidate” him.

“My attorney said, ‘Mr. Trump, do you have a taping system?’ And he said no. And he said, ‘Well then, why did you say this to Mr. O’Brien?’ And he essentially said, ‘I wanted to intimidate him,’ ” O’Brien recounted.

The most infamous White House recording system existed during President Richard Nixon’s administration. The tapes, produced between 1971 and 1973, helped doom the Nixon administration, leading to the president’s resignation over the Watergate scandal.

The tapes — and the 18-minute gap that existed in the recordings — led to the Presidential Recordings and Materials Preservation Act of 1974, which requires tapes like Nixon’s to be preserved as presidential records.