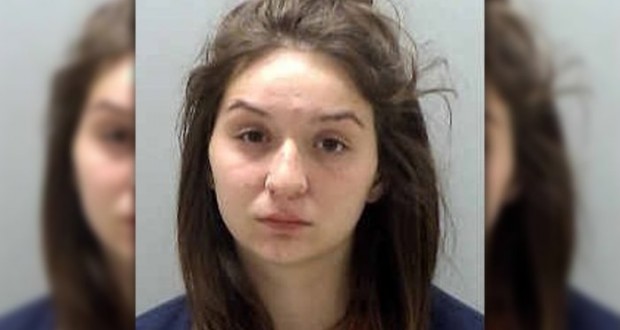 A recent YouTube stunt gone awry may land one Minnesota teen in prison for second-degree manslaughter, according to Rolling Stone magazine.

MonaLisa Perez, 19, was arrested Monday night after she fatally shot her boyfriend, 22-year-old Pedro Ruiz, in the chest while they were making a YouTube video at the couple’s house in Norman County, not far from Fargo, North Dakota. She is currently pregnant with their second child.

If convicted, Perez could face a maximum sentence of 10 years and a fine of up to $20,000. According to the Star Tribune, Perez called 911 on Monday evening to report that she had accidentally shot Ruiz while their 3-year-old daughter looked on; authorities arrived at the home to find Ruiz with a single gunshot wound in his chest. He died at the scene.

In a criminal complaint filed that same night and obtained by the Star Tribune, Perez told police that Ruiz wanted to make a YouTube video of her shooting a book (County Attorney James Brue described the book in question as a hardcover encyclopedia) to see whether the bullet would go through.

The couple had set up a GoPro camera and another camera placed high up on a nearby ladder to record the stunt; both cameras are now being used as evidence in the investigation.

Perez tweeted a message Monday night, presumably shortly before they filmed the stunt, telling followers, “Me and Pedro are probably going to shoot one of the most dangerous videos ever. HIS idea not MINE.”

In March, Perez launched a YouTube channel dedicated to showing “the real life of a young couple who happen to be teen parents.” Several of the videos uploaded to their joint channel feature her and Ruiz performing pranks and challenges, with a recent post titled “Doing scary stunts at the fair | part 1.”

“Imagine when we have 300,000 subscribers,” Perez says at one point in the video.

According to the criminal complaint, Perez told authorities that Ruiz had been trying to convince her “for a while” to perform the dangerous stunt that would ultimately end his life. She alleged that he had even shown her a different book that a bullet did not go through.

Perez also said that she shot Ruiz from just one foot away, using a .50 caliber Desert Eagle firearm.

Perez is being held in a regional jail in Crookston and is scheduled to appear in Norman County court by video Wednesday afternoon.