Shares
According to local news reports, at least two bluetooth-enabled spinners have now burst into flames while charging 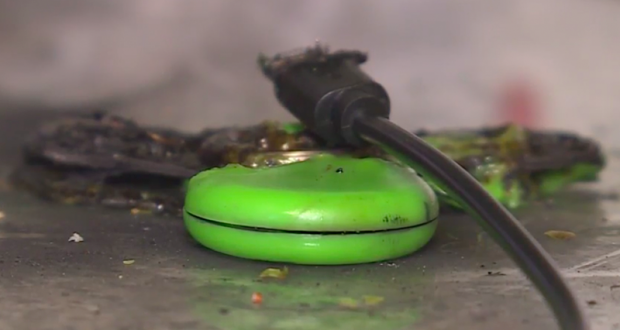 After transitioning from an obscure curiosity to a ubiquitous annoyance in record time, fidget spinners finally completed the 21st century novelty toy cycle this month, becoming something that could potentially burn down your house, according to Gizmodo.

Mothers in Michigan and Alabama shared remarkably similar stories about the toys, both of which had internal batteries to power bluetooth speakers (because of course they have those now). In each case, the device was plugged into an outlet when it caught fire, melting the spinner and scorching the surface below.

“We were about five or 10 minutes from leaving the house for the day. [My son] noticed it burst into flames and he started screaming,” Kimberly Allums of Gardendale, Alabama, said. “I was downstairs and all I heard was, ‘fire, fire.’ The fidget spinner wasn’t smoking, it was in flames.”

Allums said the spinner had been charging for less than 45 minutes. When she tried to identify the manufacturer of the faulty spinner, the mother only found the words “Made in China” on the box it came in.

Like hoverboards (and really all unregulated devices with batteries) before them, electronic fidget spinners’ rush to market and lack of safety standards have almost certainly increased the risk of dangerous failures like these. Unlike hoverboards, the tiny spinners could easily be mistaken for harmless trinkets—but fire is fire.

“They’re just simple, little things you spin and I love to play with them,” Michelle Carr, the other mother whose fidget spinner exploded, told WEYI. “I know there are tons of kids who want to go get them, but if you plug them in, just stay by and make sure it’s charged and it doesn’t catch.”

In a statement to Gizmodo, the US Consumer Product Safety Commission said that it is investigating these incidents and recommended users “stay with products that have batteries when they are charging”:

Never charge a product with batteries overnight while you are sleeping. Always follow the manufacturer’s instructions and use the charger from the manufacturer that is designed specifically for your device.

US consumers who experience safety issues with fidget spinners are urged to report the incidents at SaferProducts.gov.