Shares
The ceremony was attended by the President Poroshenko, who is in Poland with a two-day visit. 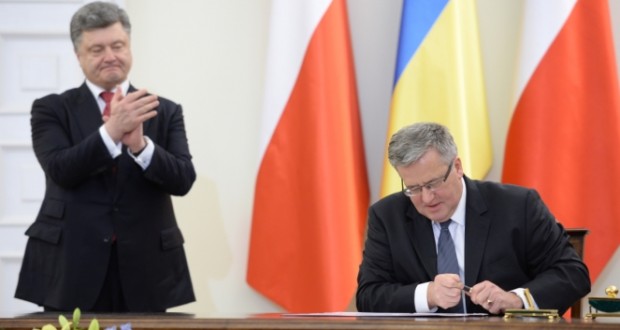 In Warsaw, Polish President Bronislaw Komorowski, in the presence of President Poroshenko, signed the law on ratification of Association Agreement between Ukraine and the European Union, joinfo.ua reports.

The law that allowed the president of Poland to ratify this agreement was almost unanimously adopted by the Saeima on November 28 and by the Senate – on December 4 (unanimously).

The law will take effect within 14 days from the date of the announcement.

It is to be recalled that September 16 the Verkhovna Rada and the European Parliament ratified the EU – Ukraine Association Agreement.

"I look forward to the continuation of a very close and friendly cooperation important both for Ukraine and Poland, the task of which is to support Ukraine in its western aspirations – both European and NATO," said Komorowski during the meeting with his Ukrainian counterpart on December 17.

Komorowski assured that Poland "supports Ukraine on its way to the institutions of the Western world." Komorowski said that Warsaw is "fully aware that both the Ukrainians and the Poles should work hard for it."

"The difficulty of fulfilling all the necessary conditions lies in the forming the climate of approval and understanding on the part of our partners in the EU and NATO," said the president of Poland.