Angela Merkel becomes Person of the Year thanks to Putin

Shares
British The Times has awarded the Chancellor of Germany Angela Merkel the title of Person of the Year for her actions in the international arena. %%rId6%% 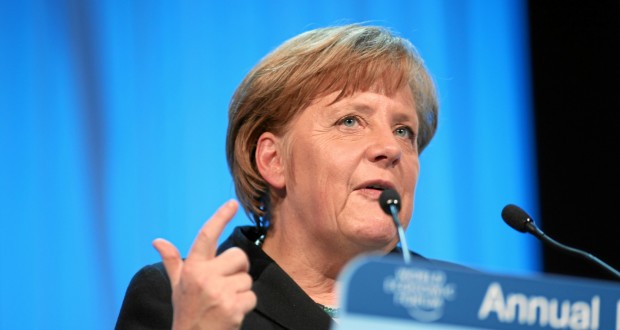 The authoritative British newspaper The Times has awarded German Chancellor Angela Merkel the title of Person of the Year for her active participation in the promotion of sanctions against Russia and opposition to Vladimir Putin.

The newspaper notes that Merkel was able to fill the void left after the United States, and has become a power broker of Europe. However, the next year will be very difficult for her.

The outgoing year has seen a lot of negative events. The world met the Russian "green men". The institutions created after World War II – NATO, the EU and the UN Security Council – failed to give adequate response to the current crisis, the magazine writes.

Against this background, only German Chancellor Angela Merkel has shown her determination and efficiency. Her reluctance to accept populist decisions and willingness to fill the void left after the U.S. administration have turned her into a power broker in the issue of east-west relations.

Merkel tried to stop the ambitions of Vladimir Putin and helped the West to focus on its values, on what is worth fighting. "She is a prominent European politician, the most powerful woman in the world, and The Times Person of the Year," the publication writes.

The British newspaper recalls that at the beginning of hostilities in Ukraine the Chancellor of Germany condemned the annexation of Crimea, but, nevertheless, she listened to the German society, which did not want to confront with Russia, and tried to persuade the Kremlin to obey international law.

However, Malaysian airliner downed in the Ukrainian sky convinced her that Putin lives "in another world." Since then, sanctions against Russia and support for Ukraine became her major tasks. And in the coming year it will be difficult to execute them.

In the first place, Merkel must continue to lobby the extension of sanctions. Several EU countries already propose to derogate these measures. Many politicians from the coalition of the Social Democratic Party share this opinion. However, she should demand that they offer an alternative method that would help to change Putin's behavior.

In addition, another Merkel's task is coordination of the US and EU positions regarding sanctions. And finally, it is necessary to keep Putin from making more reckless steps, for example, from interfering in the internal affairs of Moldova and the Baltic countries.

Yet she should not ignore domestic issues. The reluctance of Germany to take austerity measures fuels populist movements in Europe, especially in its southern part. "It would be a terrible irony if by concentrating on healing the wounds in the east-west relationship Mrs. Merkel neglects the gangrene afflicting north-south relations in the Eurozone," the newspaper writes.

The British newspaper reminds Angela Merkel saying that 10 years in power is enough. 2015 will be her tenth year as Chancellor, and if she decides to retire before the elections in 2017, it's going to happen very soon. "We urge her to stay," The Times writes.