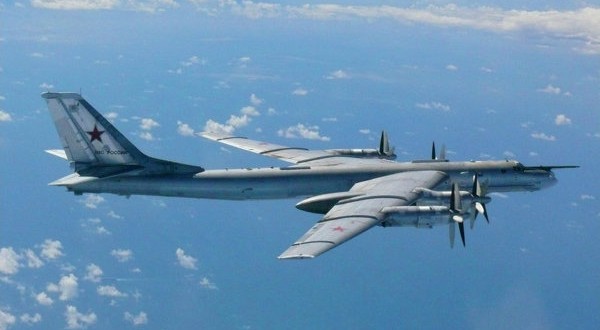 Referring to its own sources, the newspaper published the data proving that the Russian bomber was conducting a training mission and was armed with nuclear missiles. According to experts, the reason for the increased activity of Russia in NATO airspace is Putin's desire to remind that Russia is armed and dangerous, Joinfo.ua reports with reference to Express.

On Friday, the Russian ambassador Aleksandr Yakovenko was summoned to the British Foreign Office in London to explain what the Russian Tu-95 strategic bombers were doing over the English Channel. A squadron of British fighters were scrambled for interception, and Norwegian military listening post downloaded the conversations of the Russian aircraft cockpits. They learned that the bombers had nuclear warheads on board, Express writes.

UK Ministry of Defense reported that one of the Russian bombers was carrying missiles aimed for attacks on Vanguard submarines. Prime Minister David Cameron and Defence Secretary Michael Fallon were informed about it.

According to a senior British officer in the Royal Air Force, Russia is informed that the UK can intercept its communications.

"We also knew from another source that one of the aircraft was carrying a nuclear weapon long before it came anywhere near UK airspace."

Experts conclude that Russia uses flights over NATO countries to remind that Alliance is its enemy, Express writes.

"This continual and increasing probing of NATO airspace by these nuclear bombers and fighter aircraft, tankers and electronic aircraft by Russian is a pattern of increased pressure by Russia designed to remind the West and NATO that they remain a large nuclear power, and a serious military power with reach. Russia now clearly perceives NATO not as a potential threat, but as an adversary. But this intimidation belies a misunderstanding of the way the West works. As far as our military is concerned, it is helpful for Putin to be stepping up these actions. It serves to remind the public at a time where defence budgets are under pressure that this threat is still real, active and is not going away," said Justin Bronk of the Royal United Institute for Defense Studies.

It should be recalled that the Tu-95 bombers were intercepted over Britain on January 29.