Tricky move: Azerbaijan to export gas to Europe via Bulgaria

Shares
Azerbaijani President Ilham Aliyev and Bulgarian Prime Minister Boyko Borisov agreed to reanimate the project of the Nabucco gas pipeline, through which natural gas will go to Europe. 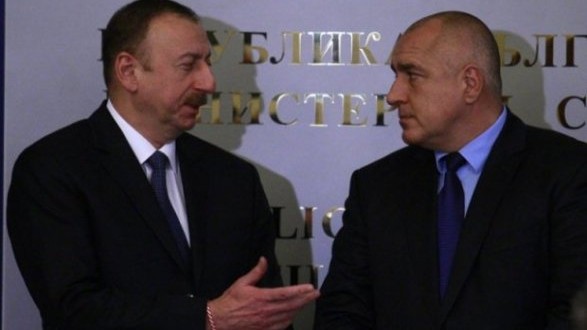 Azerbaijani President Ilham Aliyev and Bulgarian Prime Minister Boyko Borisov made a decision to reanimate the project of the Nabucco gas pipeline, through which natural gas will go to Europe.

"We want to revive the Nabucco project, more specifically the stretch that goes through Bulgaria," said Borisov after a meeting with Azerbaijani President Ilham Aliyev.

"Today, together with President Aliyev, we will present the revival project to the European Commission," Borisov said.

The head of the Bulgarian government said that Bulgaria was extremely loyal Commissioner fulfilled all legal provisions of the Third Energy project, which resulted in the blocking of the Russian project South Stream.

"Bulgaria will demonstrate its position on the question of the Turkish Stream pipeline implemented by Russia and Turkey," Borisov said.

Borisov believes that Bulgaria can not act as a brake to the projects, it will serve the interests of the European Commission. Under current conditions, the Nabucco project is fully consistent with the interests of NATO and the EU, he says.

The Prime Minister also spoke about the importance of the Southern gas corridor. Boyko Borisov said that the Azerbaijani President admitted that the Bulgarian company BULGARGAZ could become one of the shareholders of the project.

The Nabucco project, which was considered an alternative to the Russian South Stream, was officially canceled by the European Commission in 2013. Europe has tried to realize this project for many years, despite the strong obstruction of Russia proving Nabucco's unprofitability. According to Russia, there is no gas field able to provide the project with gas. Azerbaijan was focusing on two other projects to sell its gas to Europe. TANAP and TAP projects are cheaper than Nabucco, but they are more risky politically.

Putin's plans to build Turkish Stream were aimed at delivering Russian gas to Greece via Turkey. Now President of Azerbaijan and Bulgarian Prime Minister are making a tricky move.