Shares
A woman attacked the head of the European Central Bank during a press conference in Frankfurt. 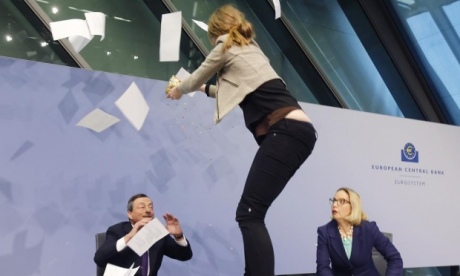 According to Joinfo.ua, a young woman climbed onto the table of the head of the European Central Bank (ECB), Mario Draghi, during a press conference and threw sheets of paper at the official.

Whilst she was doing it, the woman chanted: "End the ECB dictatorship!" Mario Draghi continued his speech only after the security managed to calm down the rebel. As it is known, recently, in Frankfurt was held the large-scale actions against the austerity policies of the ECB, where the regulator was accused of making the eurozone countries introduce austerity measures, in particular, Greece, which is provided with the aid program.