Shares
Kazakh President Nursultan Nazarbayev wins the special elections with a preliminary figure of 97.7% of the vote. 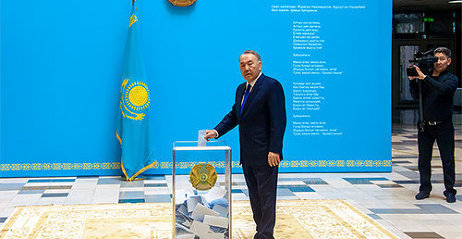 The permanent President of Kazakhstan Nursultan Nazarbayev remains as such after the victory in early presidential elections with a preliminary figure of 97.7% of the vote. The second position belongs to Turgun Syzdykov, secretary of the CC of the Communist People's Party, the third one – to Abelgazi Kusainov, the head of the Federation of Trade Unions, informs Kuandyk Turgankulov, the head of the Central Election Commission, Joinfo.ua informs with reference to the Kazakh media.

"According to the data received, the results are as follows: 0.7% of the voters voted for Kusainov, 97.7% – for Nazarbayev, 1.6% – for Syzdykov," said Turgankulov at a briefing in Monday.

Early presidential elections in Kazakhstan were held yesterday. Three candidates claimed for the post of head of state: incumbent President Nursultan Nazarbayev, Turgun Syzdykov, secretary of the CC of the Communist People's Party, and Abelgazi Kusainov, the head of the Federation of Trade Unions.

The decision to hold early elections was made after complaints of public organizations and people to elect a president in 2015 because of the difficult economic situation in the world and for them not to be held simultaneously with the parliamentary elections in 2016.

Previous presidential elections of April 3, 2011 were also held ahead of schedule. Back then Nazarbayev won with 95.55% of the vote.

Earlier, in a conversation with his counterpart from the United States Barack Obama, President of Kazakhstan said that sanctions against Russia negatively affected the countries throughout Central Asia.