Putin gets one more friend: Vietnamese President confirms his visit to Moscow

Shares
Vietnamese President Truong Tan Sang has officially confirmed his participation in the celebration of the victory over Nazi Germany in World War II. 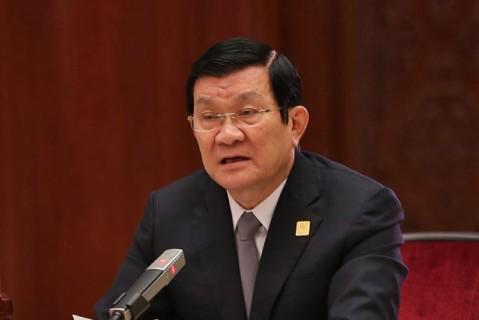 President of Vietnam Truong Tan Sang confirmed he would take part in the celebrations marking the 70th anniversary of victory over Nazi Germany in World War II, writes Russian media with reference to the communiqué of the Vietnamese Ministry of Foreign Affairs, Joinfo.ua reports.

The visit of the head of Vietnam to the Russian capital will be held on May 7-10. After that, Sang plans to come to the Czech Republic with a three-day state visit, and then, from May 10 to May 13, he will make an official visit to Azerbaijan. According to Dmitry Peskov, the press spokesman for Vladimir Putin, the events of May 8-10 in the capital of Russia will be attended by about 30 heads of state and government of other countries and chairmen of international institutions, in particular, the UN and UNESCO. However, many presidents of the leading countries refused to go to the parade in Moscow.

Earlier it was reported that Kim Yong-nam, the Chairman of the Presidium of the North Korean Supreme People's Assembly, will represent the country at the parade instead of Kim Jong-un.

Unsurprisingly, there will be no official representatives from Ukraine in Moscow on May 9.

It should be noted that the list of the world leaders refusing to participate in the May 9 parade in Russia is increasing. Thus, these include U.S. President Barack Obama, German Chancellor Angela Merkel, British Prime Minister David Cameron, President of the European Council Donald Tusk, the presidents of Poland, Slovakia, Slovenia, Georgia, Moldova, Finland, Bulgaria, Montenegro and others.

At the same time, the president of the Czech Republic Milos Zeman officially confirmed that he accepted Putin's invitation to come to the capital of the former Soviet empire for the parade. Later, however, he informed that he would not attend the parade.