Shares
At the meeting of Presidents of Russia Vladimir Putin and President of the Czech Republic Milos Zeman specific dates for lifting EU sanctions against Russia were not discussed. It was stated by Dmitry Peskov, a spokesman for the Russian leader. 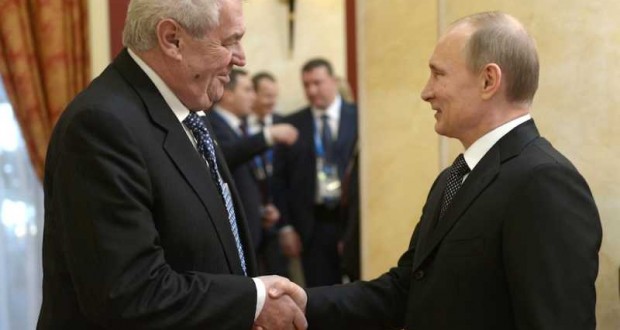 According to Peskov, the dates of lifting the EU sanctions against Russia could not be announced at this meeting, Joinfo.ua reports with reference to Russian media.

He recalled that the head of the Czech Republic had already expressed "his point of view regarding the futility of continuing this (sanctions) policy." "In this case, of course, it is absolutely impossible to say that the decision will be taken on a certain day," Reskov said.

On the eve, at his meeting with Putin, Zeman expressed his confidence that anti-Russian sanctions of the West would be over very soon. He admitted that the EU sanctions against Russia could be lifted before the end of 2015. "Sanctions are a short-term thing," said Zeman.

According to him, "politics is like the weather. There are times when it cools off and others when it warms up. I'm convinced that after this coldness we'll see some normal relations – cultural, political and economic," he said.

Earlier, representatives of the Czech intellectuals sent a letter to President Vladimir Putin, saying that on the occasion of the Victory Day on May 9 they would present "an exceptional gift" to the head of the Kremlin – Czech President Milos Zeman. With the help of such a satirical action the Czechs wanted to express dissatisfaction with the policy of Zeman, known for his pro-Russian position in the Ukrainian conflict.