Home / World / Russia’s official position regarding GRU officials arrested in Ukraine: “They are mercenaries and should not go back to Russia!”

Russia’s official position regarding GRU officials arrested in Ukraine: “They are mercenaries and should not go back to Russia!”

Shares
Consul of Russia in Ukraine says that Russia considers Aleksandr Aleksandrov and Yevgeny Yerofeyev, the Main Intelligence Directorate officials, the "mercenaries" and "policemen of the LPR". 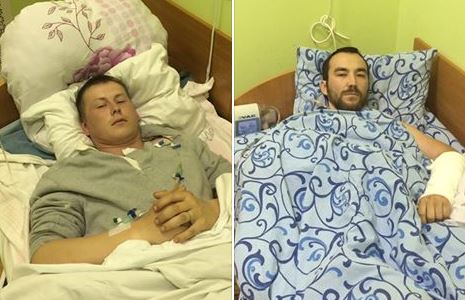 The defender of Aleksandrov informed that the meeting with the consul had been held yesterday, May 28.

“At the moment, according to Grubyi, the official position of Russia is that these soldiers, who had their contracts expired in December 2014, are mercenaries, and have nothing to do with the Russian army,” said Kravchuk.

Moreover, according to the consul, the Russian Federation will do everything to prevent these “mercenaries” leaving the LPR and DPR and going go back to Russia because it is bad for the image of the country.

The consul said that he would visit Aleksandrov and Yerofeyev, and promised to help their families to come to Kyiv to make sure that the prisoners are not tortured, but treated well.

According to the lawyer Kravchuk, when he and his colleague Sokolovskaya told Yerofeyev and Aleksandrov that Russia had officially called them “mercenaries” and “police officers of the LPR,” the soldiers were shocked and said it was not true.

It should be recalled that the soldiers of the Main Intelligence Directorate were detained near the village of Shchastya and now are being treated at the hospital. In the interview they told reporters that Russia had betrayed them and that they were lucky to be captured by the Armed Forces of Ukraine.