Shares
Employees of the City Municipal Services removed three monuments to Lenin and sent them to the warehouse. 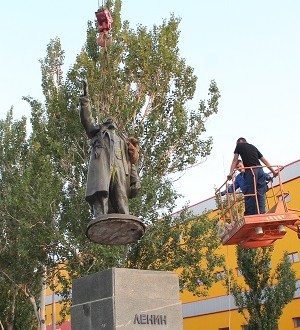 The deputies of the City Council decided to dismantle and take the monuments to Lenin to the warehouse at the meeting of the session on May 29 within the law on decommunisation signed by President of Ukraine Petro Poroshenko on May 15.

"In order for the sculptures of the Soviet legacy not to be the subject of "hunting" of the Vandals, and social tensions around this topic not to be escalated by both the supporters of the communist ideology, and their ideological opponents, it was decided to quickly move the main monuments to the warehouse of the Zhylmasiv public unity. They will be stored there until their permanent place of "residence" is determined.

Dismantling and transportation of the monuments was carried out early in the morning so as not to interfere with traffic, as the work involved large-size buses.

There were dismantled three sculptures to Lenin: from Lenin Street, from the park of culture and rest named after Gorky, and from the forecourt. The same will be done to the sculptures to Bronzos, Pakhomov, Frunze, Kirov.

Now there is being discussed the technical possibility of transferring the "main" monument to Lenin to the city museum. Perhaps in Melitopol will be created a park of the Soviet era, or all the monuments of the totalitarian regime will be handed to the Vasilevsky museum-estate of Popov, where such an exhibit already exists.

"Anyway, the fate of Lenins must be decided by community," said Ihor Symonenko, the Chairman of the Executive Committee established under the Commission on Decommunisation.