Obama regrets that G7 Summit held not in brasserie

Shares
The U.S. president was so engrossed in jokes about German beer and costumes that he wanted to move the summit to the square to drink beer there. 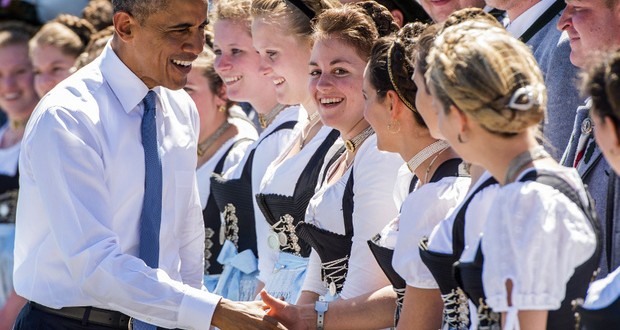 The U.S. President Barack Obama, accompanied by the German Chancellor Angela Merkel dropped by the pub in the German town of Krün on his way to the summit of the Great Seven, Joinfo.ua reports referring to NBC News.

The American leader was welcomed by townspeople dressed in traditional Bavarian clothes. While talking to them, Obama made a joke and said that he had forgot his suit and wondered whether he could buy a new one in Germany.

After that, Obama and Merkel sat down at one of the tables in the center of Krün and had a beer. He also tried pretzels – the traditional Bavarian pretzels sprinkled with coarse salt.

"It is a pity that the summit is being held in the premises of (…) We could sit, for example, on this wonderful area and drink beer," Obama said.