Shares
Uli Emanuele, an Italian BASE jumper, made the most difficult jump ever. He flew through a two meter rock crevice. In fact, there was a chance it could be his last jump. 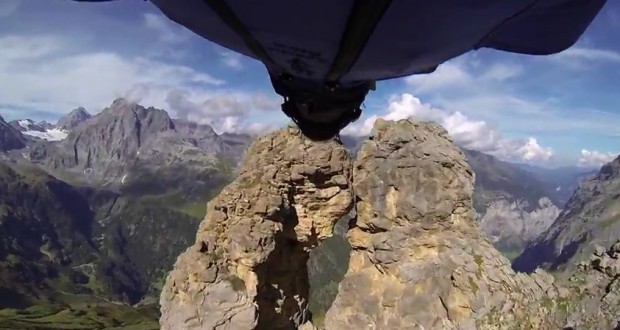 An Italian BASE Jumper Uli Emanuele posted a video showing his flight through the two-meter crack in the rock in a special wing-suit. During one week the video has collected more than 3 million views on YouTube. In an interview with RT, Emanuele told about his extreme flight.

Uli Emanuele accurately calculated the trajectory of the flight. He filmed his jump with the help of several cameras attached to his helmet and suit. During such jumps a parachute is used for landing.

Such kind of tricks is accompanied by powerful emission of adrenaline in the blood, but in the end of the video the Italian looks quite calm and satisfied.

Uli Emanuele found the crevice in the mountains of Switzerland three years ago, and back then he came up with the idea to make a jump.

“Recently I’ve lived in Switzerland. I’ve earned money by washing dishes in a restaurant. Such a job is not for me, but I was doing it just to be able to practice every day. The restaurant, where I washed the dishes, is located on top of the mountain, and I lived in the valley. So every day I could jump down and fly home. I was very happy with my boss! I told him: “Sorry, boss, I’m quitting! I’ll try to jump, and then I will continue to travel around the world.” All he said to me was: “Ok, Uli! If you need to come back – just give me a call!”