Shares
The Bolivian President Evo Morales presented the Pope Francis a crucifix in the shape of the hammer and sickle. 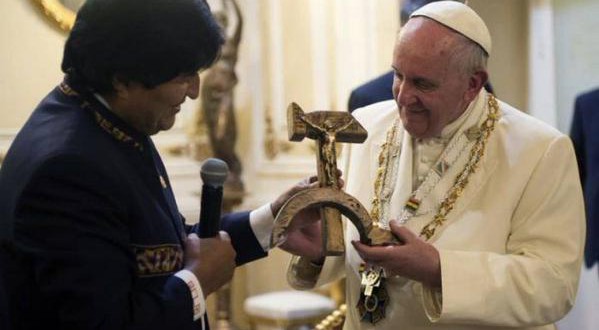 The Bolivian President Evo Morales presented Pope Francis a crucifix in the shape of the hammer and sickle, which caused confusion among the Catholics, who declared that the Pope was being manipulated for ideological purposes, Joinfo.ua reports.

So, Morales gave the Pope a crucifix in the shape of the hammer and sickle with nailed Christ.

Having taken the wooden crucifix at the official ceremony, Francis was looking at it for a few seconds, then gave it back to the assistant of the President of Bolivia.

The Bolivian authorities said that the gift had no political overtone. The Minister of Communications Marianela Paco said that Morales thought that being “father of the poor” Francis would understand such a gesture.