Shares
Sebastian Gonzalez, a driver of the Pope, became popular because of one selfie with the Pope. 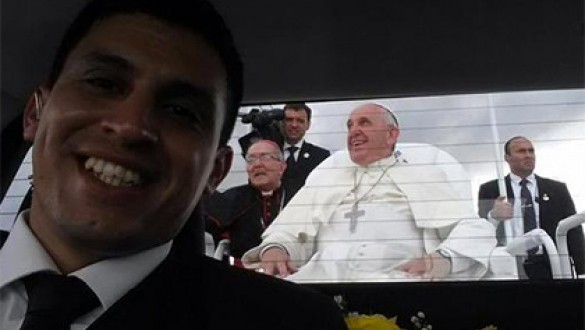 Sebastian Gonzalez, a driver of the Pope, became the star of social networks after having published a photo with the head of the Catholic Church, Joinfo.ua reports with reference to The Daily Mail.

Gonzalez took the photo being at the wheel of the pontiff’s car when he was in the capital of Paraguay, Asuncion. The picture shows Pope Francis, his guards, well, and the driver.

Gonzalez posted the selfie with the pontiff on his page on Twitter, and after that Internet users began actively sharing it and writing in the comments that it was the best selfie with the Pope. In Asuncion, the pontiff himself commented that he respected selfies, but he was too old to take them.

Earlier, we presented you a collection of most unexpected and amazing selfies.