Shares
The political discourse on the issue of migrants in Germany by German Chancellor Angela Merkel made a girl from Lebanon cry. She burst into tears right in front of television cameras. 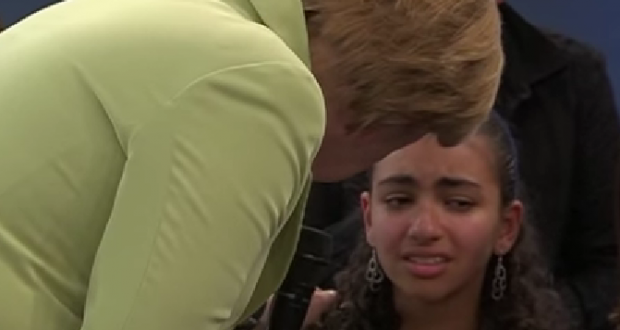 During the meeting of the head of the government with students in Rostock, the German Chancellor Angela Merkel listened to the speech delivered by a girl from Lebanon, whose parents were nearly deported, and explained to her why the German authorities were not able to host all visitors, Joinfo.ua reports.

The German Chancellor Angela Merkel added that the girl might also have to put up with deportation, as well as thousands of other asylum seekers. After these words, the girl burst into tears, and Merkel had to interrupt her discourse on migration policy and try to calm down the child.

This situation has caused a heated discussion on the Internet, users of social networks believe that the Chancellor should have abandoned such cold reasoning on the subject of migration policy and try to fudge such a serious response. The video shows that Merkel herself did not expect this turn of events. She softened her tone, came up to her interlocutrix and tried to calm her down.

The government circles believe that in terms of language Merkel’s response was replete with political terms. Probably, that’s why she seemed so tough.

It should be recalled that this year in Germany there will be submitted about 400 thousand applications for refugee status. It is twice as many compared to the last year. In 2014, there were deported 10,8 thousand people.