Poland: “Third Reich gold” found – but not reached yet 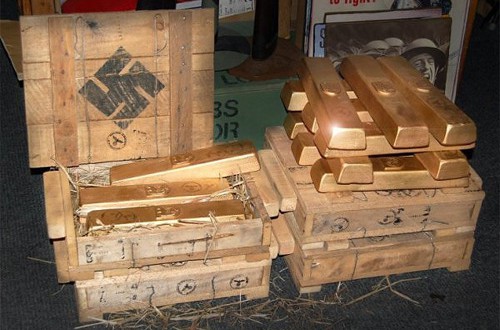 The legendary armored train, by which the Nazis allegedly transported the gold and cultural values ​​are likely mined. CEO restorer of Poland, Deputy Culture Minister Zhuhovsky said at the press conference, Onet.pl informs.

Scattering all the rumors and speculations, flooded the Internet after report that some treasure hunters discovered the legendary Nazi “Gold Train” Peter Zhuhovsky officially admitted that he saw georadar images with his own eyes, and that is sufficient proof of the information about the discovery of the legendary train

At the same time the Ministry of Culture officially warned treasure hunters from trying to reach the “Third Reich gold” is really found – but to get to it would be extremely difficult.” Apparently, the official said, the Nazi train is mined, and may blow up at any careless movement.

“There is a great probability that the train is mined.” – Zhuhovsky noted.

“This is an unprecedented discovery. So far we have found only tanks, but now it has to be a train 100 meters long. We do not know how it’s protected and what’s inside. It should be done by appropriate services”, – Gazeta Wyborcza quotes the Head restorer.

Zhuhovsky repeated that all hypothetical values ​​contained in the train, are the property of the state. At the same time, he acknowledged that, despite the fact that the Ministry has already received detailed information on the location of the train, it is difficult yet to say when it will be lifted up to the surface.

Two residents of the Polish town of Walbrzych made a statement that they found a German WWII armored train. And this is the armored train, on which the Nazis transported the gold.

According to various information available, the Nazi train, which mysteriously disappeared in late 1944, was to carry documents, gold, art and even the famous Amber Room.