Pope Francis calls for the world to pray for migrants

Shares
Pope Francis begs the world to stop the violence against migrants. He also proposed during his traditional Sunday sermon to pray for those refugees who died on their way to Europe 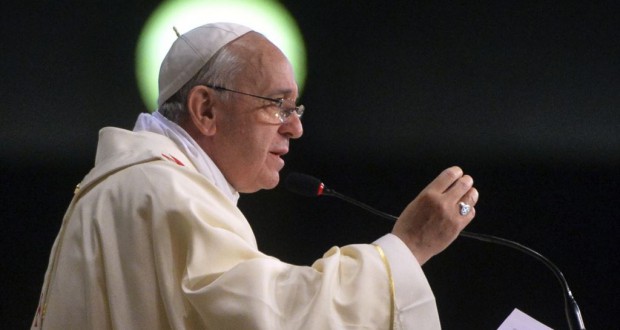 During the traditional Sunday sermon at St. Peter’s Square in the Vatican Pope Francis urged to pray for people who died in the attempt to reach Europe shores from their war-torn countries, Joinfo.ua reports.

Pope Francis also condemned the fact that illegal immigrants, struggling every day for their lives, are treated as criminals.

“Unfortunately, recently, many people had died during their terrible journeys. I pray and call to pray for all those brothers and sisters. First of all, I join the whole church of Austria in prayer for those 71 who died, including four children, found in a truck on the highway Vienna-Budapest “- said the Pope during the traditional Sunday sermon at St. Peter’s Square in the Vatican City.

The Pope also called for effective international cooperation to prevent “these crimes that offend the entire human family.”

The Pope drew attention to the fact that the persecutions of Christians continue today in the Middle East and in other regions of the world.

According to figures released by the UN High Commissioner for Refugees, in 2015 more than 300 000 people attempted to come to Europe illegally.

As you know, more than 190,000 refugees were able to get across the Mediterranean to Greece and Italy, but it lost about 2.5 thousand people.

Previously, the United Nations has stated that refugees on the Greek island of Kos, Chios and Lesvos have problems with accommodation and are forced to live in unsanitary conditions, often without access to fresh water.

Earlier on the day of 70th anniversary of the nuclear bombing of the Japanese city of Nagasaki Pope Francis called on to impose a total ban on the use of nuclear weapons.