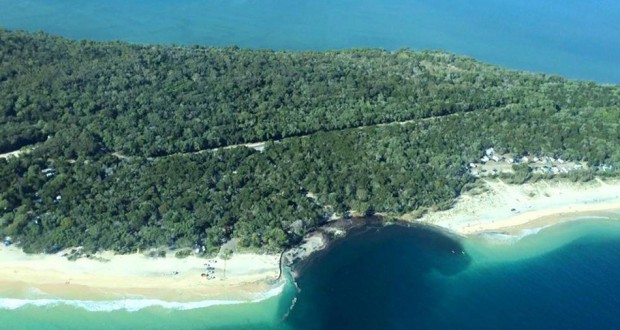 More than 200 metres of beachfront at the campsite in Queensland on Sunday sank down into the ocean, Mashable.com reports. Media report that no one was injured but some tents, cars and trailers were swallowed by the giant hole in the beachfront.

The campside is located at Inskip Point near Fraser Island in Queensland is a popular tourist destination. The campers were on the beach and watched the moment when the land opened up and swallowed the beach and part of the campsite with tents and cars.

Now the sinkhole is about three-meters deep. Geological engineers have started the preliminary investigation. Now the sinkhole is three-metres deep, but it can grow further at any moment, so at least 300 people have been evacuated from the campsite.

Such geological events happen when the water dissolves limestone rocks beneath the shore, and wheather, heavy rains and human activity can cause the further erosion of the ground.

It should be recalled that on Sunday night people all around the world could watch a rare phenomenon – the total “supermoon” lunar eclipse, also known as a “blood moon”.