Shares
Today October 16, summit of heads of Commonwealth of Independent States (CIS) and a session of the Supreme Eurasian Economic Council kicked off in Burabay, Kazakhstan 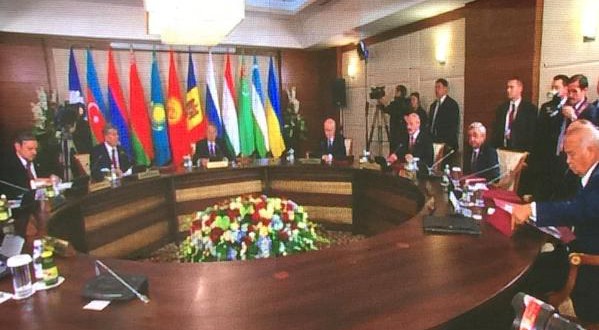 Today the summit of the CIS and the Supreme Eurasian Economic Council started. The meeting is held in the Kazakh Burabay. According to the protocol, Ukraine on summit is represented by Charge d’Affaires of Ukraine in Kazakhstan Yuri Lazebnik, Joinfo.ua reports.

According to Twitter of the Kremlin pool’s reporter Dmitry Smirnov, Kyrgyz President Almazbek Atambayev and the leader of Armenia Serzh Sargsyan have already arrived at the event.

Azerbaijani President Ilham Aliyev is also present, and he has had a long talks with Kazakh leader Nursultan Nazarbayev.

President of Belarus Alexander Lukashenko has arrived in Kazakhstan alone, without his son.

Russian President Putin Ladimir traditionally was the last to come to the opening ceremony.

The Summit is attended by Presidents of Tajikistan – Emomali Rahmon, Uzbekistan – Islam Karimov, Deputy Minister of Foreign Affairs and European Integration of Moldova Andrei Galbur and deputy chairman of the Cabinet of Ministers of Turkmenistan Satlyk Satlykov.

A number of documents are expected to be signed on the results of the CIS Summit.