Home / World / Protests in Moldova continue: the left preparing a bill on the government’s resignation

Protests in Moldova continue: the left preparing a bill on the government’s resignation

Shares
Socialists and communists in Moldova continue the efforts make the current government to resign and take their place. Socialist Party is already preparing a draft of law on the no-confidence vote 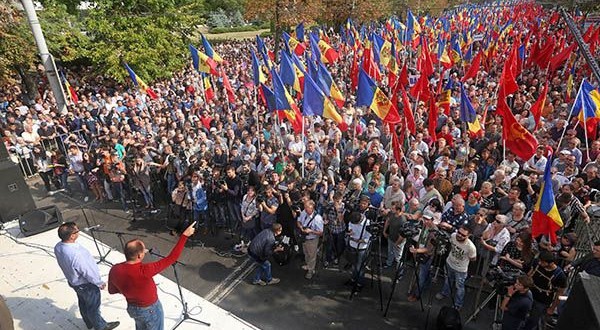 Socialists and communists in Moldova continue the efforts make the current government resign and take their place. Party of the Socialists (MDBGS) is already preparing a draft of law on the no-confidence vote to the government under the leadership of Prime Minister Valeriu Strelet, Joinfo.ua reports with the reference to Ukrinform.

“Valera (Valeriu Strelet – Prime Minister of Moldova), leave voluntarily, because you will not hold on until the New Year or Christmas. We, the Socialists, will initiate the procedure for a vote of no-confidence in the government, and we hope next week the Parliament will vote on this issue”, – said the leader of the Socialists, Igor Dodon.

The head of the Communist Party, the former Moldovan President Vladimir Voronin also called to support the vote of no-confidence in the government as long as the head of the government, he believes, is not engaged in solving the economic problems of the country, but more trying to help his predecessor and former Liberal Democrat leader Vlad Filat detained on charges corruption.

PM Valeriu Strelet said that these initiatives of Socialists and Communists are expected, as they seek to make Moldova deviate from the European way.

According to the Moldovan legislation, the government may resign if at least 51 of the 101 members of parliament would support the vote for no-confidence.

It should be recalled that protests in Moldova started on September 6, when thousands of people walked to the streets of Chisinau dissatisfied with the corruption of the government. People protested against a fraud in which $1 billion has disappeared from the banking system. The fraud has caused a sharp depreciation in the national currency, the leu, fuelling inflation and driving down living standards. The scandal around the missing $1 billion has led to the EU and other economic partners withholding assistance to Moldova until it is back on an International monetary Fund program. The main accusations of corruption are brought against Moldovan oligarch and politician Vladimir Plahotniuc, who is also vice-president of the Democratic Party and Vice-Speaker of the Parliament of Moldova.

The impetus for the protests was a bigconcert, which was scheduled on September 7. But protesters said it would be just immoral to organize a concert, when the country was in deep crisis. After meeting with Moldovan President Nicolae Timofti September 18 representatives of сivic platform Dignity and Justice (DA) said they have no intention to demand the president’s resignation but they demand the resignation of the head of the National Bank, the Prosecutor General, the head of the Anticorruption Center and Chairman of the Supreme Council of Justice, since these officials, in their estimation, are responsible for the financial and banking crisis.

At the end of September, representatives of left-wing forces began to conduct active protest. With the support of the socialists, the tent camp in Chisinau downtown at the parliament building began to grow rapidly. Tents in front of the Ministry of Agriculture began to establish during the meeting, which was held by Our Party together with the Party of Socialists. Another unsolved issue of Moldova is Transnistria, an internationally unrecognized entity with population of about half a million people, which has the status of “autonomous territorial unit with a special legal status.” On September 30, at the debate during the 70th session of the UN General Assembly in New York, Valeriu Strelet, Moldovan PM said that his country insists on the withdrawal of the Russian army from the territory of Transnistria.