Shares
Atacama Desert in Chile, one of the driest places on Earth, after heavy rains earlier this year, is covered in a multitude of flowers 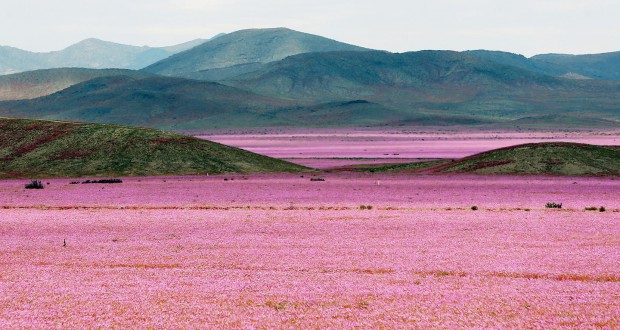 The Atacama Desert is a plateau in South America and the driest non-polar desert in the world. It covering a 1,000-kilometre (600 mi) strip of land on the Pacific coast, west of the Andes mountains. Most of the desert is composed of stony terrain, salt lakes, sand, and felsic lava. Heavy rains in March gave parts of the desert its first taste of rain in almost seven years. Some areas got as much as seven years’ worth of rain in just 12 hours, Joinfo.ua reports with the reference to Mashable. Now it look like a psychedelic wonderland as pink mallow flowers bloom in the valley, following a year of unprecedented rain. The floral phenomenon is known as flowering desert.