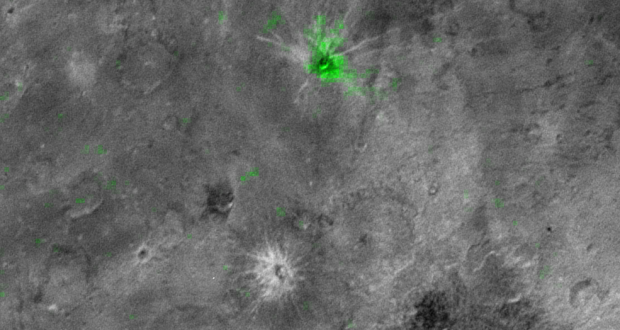 The crater, informally named Organa, caught scientists’ attention as they were studying the highest-resolution infrared compositional scan of Charon, Joinfo.ua reports with the reference to NASA.

Organa and the surrounding area, when studied in infrared spectrum, appear to be covered of frozen ammonia, which is unique on Pluto’s largest moon. The infrared spectrum of nearby Skywalker crater, for example, is similar to the rest of Charon’s craters and surface, with features dominated by ordinary water ice. Using telescopes, scientists first observed ammonia absorption on Charon in 2000, but the concentrations of ammonia around this crater are unprecedented.

“Why are these two similar-looking and similar-sized craters, so near to each other, so compositionally distinct?” asked Will Grundy, New Horizons Composition team lead from Lowell Observatory in Flagstaff, Arizona. “We have various ideas when it comes to the ammonia in Organa. The crater could be younger, or perhaps the impact that created it hit a pocket of ammonia-rich subsurface ice.  Alternatively, maybe Organa’s impactor delivered its own ammonia.”

Both craters are about the same size – roughly 5 kilometers (3 miles) in diameter – with similar appearances, including bright wisps or rays of ejected material, or ejecta. One apparent difference is that Organa has a central region of darker ejecta, though from the map created with data from New Horizons’ Ralph/LEISA instrument, it appears that the ammonia-rich material extends beyond this dark area.

“This is a fantastic discovery,” said Bill McKinnon, deputy lead for the New Horizons Geology, Geophysics and Imaging team from Washington University in St. Louis. “Concentrated ammonia is a powerful antifreeze on icy worlds, and if the ammonia really is from Charon’s interior, it could help explain the formation of Charon’s surface by cryovolcanism, via the eruption of cold, ammonia-water magmas.”