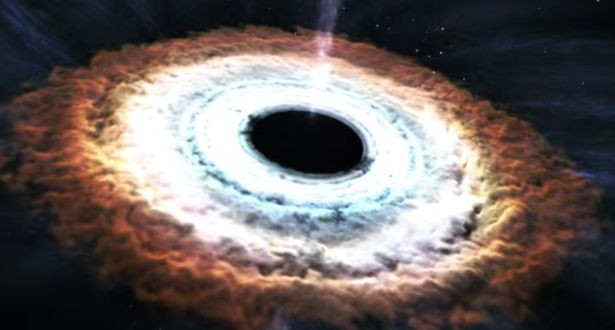 Scientists assume the devastating explosion could be creating a new universe, Joinfo.com reports with the reference to Mirror. The images, which were released by NASA, demonstrate an enormous eruption in the cluster MS 0735.6+7421. The galaxy is being torn apart in a huge eruption that is the second biggest. Scientists from NASA reported that the explosion is less then the Big Bang, which ‘gave a birth’ to our own universe.

The star cluster has a supermassive black hole at its centre, which has ” gorged itself” on the equivalent of 300 million suns , before “violently ejecting” some of this material in a massive cosmic belch.

This big boom is so powerful that it has sent gas rocketing out at supersonic speeds, creating a cloud which is one million light years wide.

The gas emitted during the explosion is thought to weigh more than the Milky Way, our home galaxy.

“This black hole is feasting,” said Paul Nulsen of the Harvard-Smithsonian Center for Astrophysics when the explosion was first discovered in 2005.

NASA has now released the new pictures of the deep space detonation which show it unprecedented detail.

The pink clouds are actually radio waves escaping from the black hole, which were detected by the Very Large Array.

Data from this radio telescope was then combined with visual imagery from Hubble to create the stunning photo of the explosion – which has lasted more than 100 million years.

The second biggest bang might look apocalyptic, but it could actually be a creative forces.

Some physicists believe black holes are the ” seeds of the birth of new universes ” and build entirely new realities with totally different rules.

As reported earlier, an alien-hunter refused to rule out a possibility that a massive artificial structure wasn’t built by advanced extraterrestrial species. Also Seth Shostak told that he and his team still “unable to disprove” the theory that a massive ‘alien megastructure’ is causing the mysterious light patterns spotted around a distant star.