Home / World / UFO burned in the skies over Sri Lanka

UFO burned in the skies over Sri Lanka 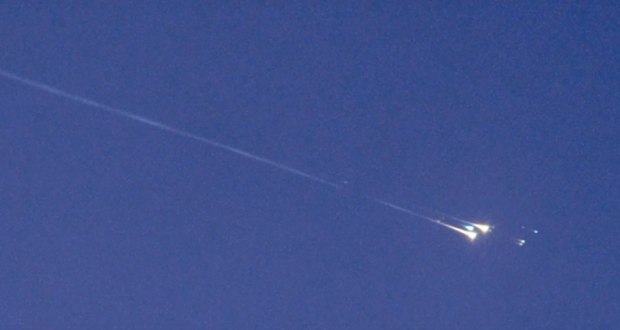 An unknown object has burned in the atmosphere over Sri Lanka early this morning. The scientists have not answered yet, what this could be, Joinfo.ua reports with the reference to Mirror.

This object was detected by NASA on October 3, 2015 by the Catalina Sky Survey (CSS), one of the NASA-funded asteroid search projects operated by the University of Arizona and located near Tucson. The object was tagged WT1190F. NASA was interested in tracking this object because it moved more like an asteroid from interplanetary space than of a typical piece of space debris. So, the received data will help the scientists to detect and track asteroids and calculate their trajectories.

According to the scientists, it was up to two meters wide and hollow.  So, they assumed that it could be an artificial object, probably, a chunk of space junk or debris, or a part of a spaceship, for example, the remnants of an Apollo rocket.

It was flying on the “deep Earth orbit” at a large distance, so the scientists couldn’t identify it.

Some conspiracy theorists speculated that it was an alien spaceship. This object was supposed to fall into the Indian Ocean today, if it does not burn after entering the atmosphere.

Anyway, the space fans from around the world were excited to watch it enter the atmosphere today, but they were disappointed by the show. The object WT1190F entered Earth’s atmosphere at 6 am over the southern coast of Sri Lanka burned in seconds.

“[It could be] a lost piece of space history that’s come back to haunt us”, Jonathan McDowell, an astrophysicist at the Harvard-Smithsonian Center for Astrophysics told Nature News.

As reported earlier, NASA showed an astonishing images that demonstrate a huge explosion ever captured by scientists. Scientists assume the devastating explosion could be creating a new universe.