Oligarchs must be expelled from Ukraine without right on entry – expert

Shares
Ukrainian media expert Yuriy Butusov is sure that all ‘major oligarchs’, against whom there is a war going in Ukraine, should be expelled 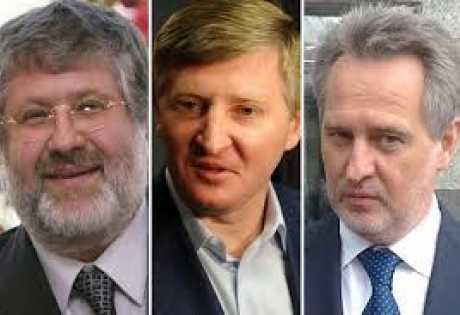 Ukrainian media expert Yuriy Butusov is sure that all ‘major oligarchs’, against whom there is a war in Ukraine, should be expelled from the country. Konstantin Grigorishin, Ihor Kolomoyskyi, Dmytro Firtash and Rinat Akhmetov – should become persona non grata in our country.

In an interview with the Internet portal “MIR“, media expert and military journalist Yuriy Butusov suggested that oligarchs Konstantin Grigorishin, Ihor Kolomoyskyi, Dmytro Firtash and Rinat Akhmetov should be deprived of the right on the entrance to Ukraine. That is the starting point of the fight against the oligarchs, Joinfo.ua reports.

According to Butusov, there are two parallel realities in the mind of Ukrainian President Petro Poroshenko.

“In one reality he fights against the oligarchs. Ihor Kolomoyskyi, for example. Should Poroshenko fight against him? – Absolutely. Kolomoyskyi is the oligarch that controls a significant part of the economy, which is not controlled by the state. The level of Kolomoyskyi’s influence on the open joint-stock companies Ukrnafta (oil- and gaz-producing company) and Ukrtransnafta (oil- and gas-transporting company, which provides the transit of natural gas from Russia to the EU) is unacceptable. Therefore, Kolomoyskyi, Akhmetov and Grigorishin (who entered Ukrainian business with the help of Petro Poroshenko) must be expelled from Ukraine. Especially Grigorishin, whose place is rather in prison. This is a Russian businessman who funded the anti-Ukrainian Communist Party deputies of the Verkhovna Rada, who voted for the dictatorial laws of January 16, 2014. These laws, which were voted in the Verkhovna Rada in the hottest point of the Maidan, imposed severe restrictions on the civil rights in Ukraine, made the civil society illegal and allowed the authorities to punish the citizens voluntarily. Many clauses of these laws were adopted from the Russian legislation and introduced such terms as ‘extremist activity’ and ‘foreign agent’ into Ukrainian legislation.

That was, in fact, an attempt to seize power in Ukraine. Grigorishin, as a participant, should be sued and questioned in court for such actions, but not to be welcomed to the Presidential Administration, stressed Butusov.

So, what should President Poroshenko and Boris Lozhkin, the Head of Presidential Administration, do? They should not complain about the oligarchs, but simply have called Valeriy Heletey (the Chief State Guard after the Revolution of Dignity) and told him: “Chief Heletey! These are the men that are prohibited to come to me. So, shut the door and do not let them come in,” – Butusov suggested.

“It’s very simple! And the oligarchs will disappear immediately – once they see the shut door of the Presidential Administration!”

“We have the Anti-Monopoly Committee, we have enough tools to make the oligarchs to fulfill the requirements of the state. The state should not fight one oligarch with the help of the other one, trying to impose new dragons upon the people. The government should introduce common rules for all,” – emphasized Butusov. “I repeat: Ihor Kolomoyskyi, Victor Pinchuk, Konstantin Grigorishin, Rinat Akhmetov, Dmytro Firtash – all those guys, as well as their lawyers, assistants, managers – they all have to be persona non grata in any state institution. Once that happens – the process of the de-oligarchization will end with the crushing victory, “- said Butusov.

In his opinion, it is absolutely necessary to be done in Ukraine. If the leaders of Ukraine do not want just to make fools of the citizens, who voted for them, but to make real reforms. After all, there are certain issues, on which President Poroshenko responds reasonably and logically. He even listens to the criticism. However, for the time being.

Making the speech at the Odesa Financial Forum on September 24, 2015, he said: “Rather than supporting Ukraine’s reforms and working to root out corruption, corrupt actors within the Prosecutor General’s Office are making things worse by openly and aggressively undermining reform.”

President Poroshenko, in the interview with Tim Sebastian in Conflict Zone, again promised an independent investigation on the corruption (See his answer in the video version of interview below, from the 15′ ).