NASA created visualization of the space ‘weather’ at Pluto 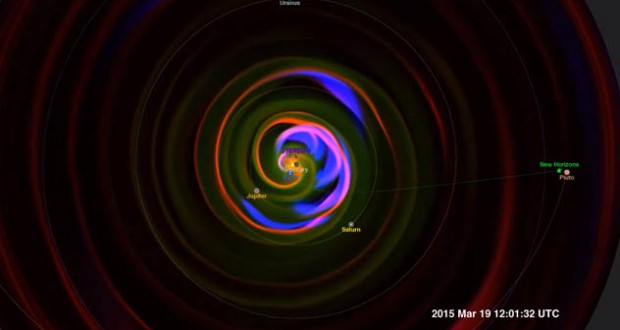 The vacuum of the universe is a thousand times emptier than a laboratory vacuum. But the sun releases a constant stream of particles called the solar wind and denser clouds of particles or coronal mass ejections (CME) with magnetic fields. The density, speed, and temperature of these particles, as well as the direction and strength of the embedded magnetic fields, make up the space environment, NASA reports.

So, the scientists at NASA’s Goddard Space Flight Center in Greenbelt, Maryland, worked with the New Horizons team to test how well their models—and other models contributed by scientists around the world—predicted the space environment at Pluto.

To map the space environment at Pluto, scientists combined the predictions of several models—and looked at events that had long since passed Earth.

“We set the simulation to start in January of 2015, because the particles passing Pluto in July 2015 took some six months to make the journey from the sun,” said Dusan Odstrcil, a space weather scientist at Goddard who created the Enlil model. The Enlil model, named for the Sumerian god of the wind, is one of the primary models used to simulate the space environment near Earth and is the basis for the New Horizons simulation.

The new, combined model tracks CMEs longer than ever before. Because particles must travel for many months before reaching Pluto, the CMEs eventually spread out and merge with other CMEs and the solar wind to form larger clouds of particles and magnetic field. These combined clouds stretch out as they travel away from the sun, forming thin ring shapes by the time they reach Pluto—quite different from the typical balloon shape of CMEs seen here at Earth.

Earlier, New Horizons spacecraft has sent back the first in a series of the sharpest views of Pluto it obtained during its July flyby – and the best close-ups of Pluto that humans may see for decades.