Shares
Today, after the Verkhovna Rada plenary session, the faction of “Bloc of Petro Poroshenko” held a meeting and excluded MP Oleg Varna from the faction 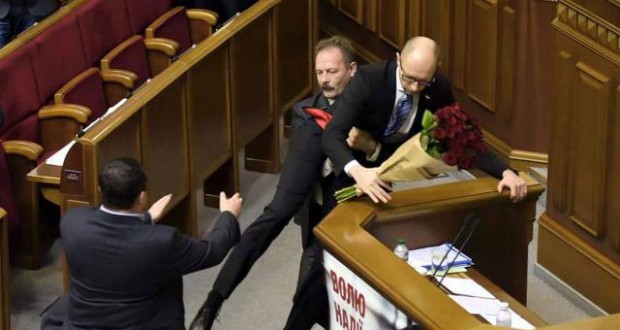 Today, after the Verkhovna Rada plenary session, the faction of “Bloc of Petro Poroshenko” held a meeting and excluded MP Oleg Varna from the faction, Joinfo.ua reports.

In turn, Oleg Barna said that he himself resigned from the faction.

“Five minutes ago, I got out of the “Bloc of Petro Poroshenko” faction,”- said Barna at the meeting of the procedure committee of the parliament.

He also explained his actions by the fact that he couldn’t do it any other way. According to him, the rating of the prime minister’s political force dropped to zero during the year, which meant that the prime minister should resign.

“Prime Minister, who has not fulfilled the promises, should resign,” – said Barna. He was also angered by the fact that the deputies do not want to sign the demand for the resignation of the government.

It should be recalled that today, Ukrainian Prime Minister Arseniy Yatsenyuk was delivering his annual report in the Verkhovna Rada.  When he was at the rostrum answering the questions of the deputies, MP Oleg Barna approached him with the bunch of roses and grabbed him. Mr Barna tried to carry him out from the podium, but deputies from Yatseniuk’s People Front wade in to help him. At some point, a fight broke out in the Parliament.