Shares
On Saturday December 12, French Foreign Minister Laurent Fabius declared the pact adopted to the people of nearly 200 countries after two weeks of negotiations In Paris 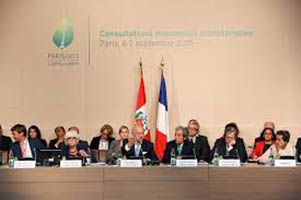 On Saturday December 12, French Foreign Minister Laurent Fabius declared the pact adopted to the people of nearly 200 countries after two weeks of negotiations In Paris, the Verge reports.

The deal united both large, wealthy countries such as the United States, as well as small island nations increasingly seeing the effects of climate change first hand. The new agreement aims to limit the world’s expected atmospheric temperature increase to 2 degrees Celsius, while also making room for the more ambitious goal of limiting the increase to 1.5 degrees Celsius. Climate scientists have said that stopping increases there may help fend off some of the worst effects of climate change.

Under the deal, individual countries will have individual plans to reduce emissions in the coming decades, with a schedule to jointly update their emissions standards in 2020 and further tighten standards every five years from then. Some parts of the deal will be essentially voluntary; others, under the agreement, are legally binding. The final draft agreement also made provisions for wealthier nations to economically support the smaller nations’ efforts.

But the deal is not what everyone may have hoped for. The agreement does not, for example, allow for “liability or compensation” for the damage already brought by climate change — meaning countries responsible for large amounts of emissions will not have to retroactively pay for damage done to smaller countries. Presidential candidate Bernie Sanders said the deal “goes nowhere near far enough.” James Hansen, a scientist well-known as the father of climate change awareness, bluntly called the talks “a fraud.”

The deal is the result of the extended negotiations in Paris, which reached beyond their expected deadline before the release and approval of the draft. But the scope of the agreement is wider than just the past weeks of negotiations suggest, as countries around the world have worked toward an accord for years in an effort to come to an agreement on how to globally fight the effects of climate change.