Shares
February 8, German Chancellor Angela Merkel arrived in Ankara to met with Turkish Prime Minister Ahmet Davutoglu for more talks on reducing the influx of migrants to Europe. They also condemned the Russian-backed airstrikes over Aleppo in northern Syria 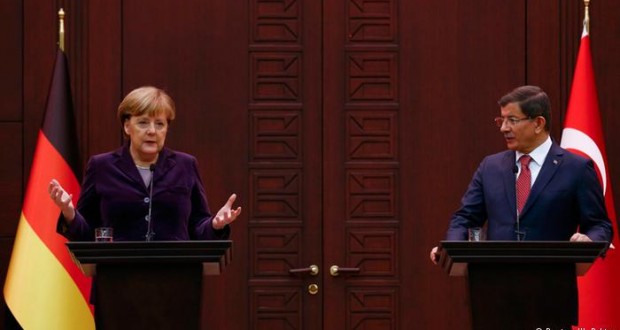 German Chancellor Angela Merkel’s visit on Monday came just weeks after the EU settled a deal with Turkey, which would see Ankara receiving 3 billion euros ($3.35 billion) in aid towards the care of the 2.7 million Syrian migrants already in Turkey, Deutsche Welle reports.

In exchange for the 3 billion euro aid package, Turkey has pledged to help protect Europe’s borders. Germany has been hit particularly hard in recent months, with an unprecedented 1.1 million asylum seekers arriving last year – many of them fleeing conflicts in Syria, Iraq and Afghanistan.

Davutoglu said on Monday that Ankara would inform Brussels next week about their initial plans for the financial aid. Turkey has already agreed, however, to grant work permits to Syrians as an incentive for them to stay in Turkey. Other plans include increasing coast guards’ capabilities and designating human smuggling as a form of organized crime – which would result in stricter punishments.

The Turkish prime minister also announced plans for Germany and Turkey to carry out “joint efforts” for greater NATO involvement in the refugee crisis, saying both countries would seek the use of NATO’s observation capabilities at the border with Syria and in the Aegean Sea.

Turkey is also facing increasing pressure from the EU to open its border to 30,000 Syrians who have massed at the border in recent days, many seeking safety from the bombing of the city of Aleppo.

Speaking at Monday’s press conference, Davutoglu said the border would be opened “when necessary,” adding that the Russia-backed air strikes on Aleppo should not be tolerated with the idea that Turkey will accept the refugees.

Merkel said she had not just been appalled by the situation in Aleppo but “horrified by what has been caused in the way of human suffering for tens of thousands of people by bombing – bombing primarily from the Russian side.”

It should be recalled that according to the latest report of the Human Rights Watch, published on February 8, the Syrian-Russian joint military operation in Syria has included the use of internationally banned cluster munitions.

Also, early morning on February 8, at least 27 migrants, including 11 children, were killed after a boat capsized in Aegean sea between Turkey and Greece.