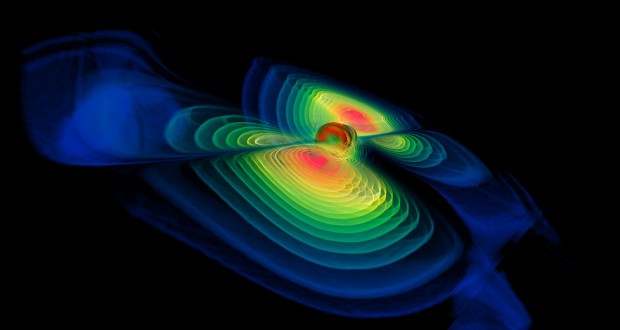 Albert Einstein predicted the existence of gravitational waves 100 years ago, but he thought them far too feeble to detect as they undulated across the universe.

The news was announced February 11 by members of the Laser Interferometer Gravitational-Wave Observatory (LIGO), a 15-nation, 900-scientist, $1 billion experiment that has searched for signs of the phenomenon since 2002.

“Finally these waves have been detected on Earth with an unbelievably sensitive experiment. And, surprisingly, the source of the waves is a system of two black holes in orbit around each other, that spiral inward and smash together,” Cornell physics and astrophysics professor Saul Teukolsky confirmed in a statement emailed to Tech Insider.

The waves the researchers detected were created by two black holes colliding and merging to form a single black hole 1.3 billion years ago. When the two black holes merged, they released the energy of three suns.

Physicist Szabi Marka, a LIGO collaborator based at Columbia University, told Tech Insider before the announcement that detecting the waves “would revolutionize physics” and chart out “the last undiscovered territory of Einstein.”

And a collision of two black holes is a cataclysmic event we could only dream of observing until now.

There are many other uses of gravitational waves now all squarely within the realm of possibility, and Marka says the coming era of research that’s barreling toward us is going to be “spectacular.”

“We’ll open new doors which can never be closed again,” he said.

The discovery not only vindicates Einstein’s wildest prediction and gives astronomers a powerful new tool to probe the cosmos — from deep inside exploding stars to the surfaces of black holes — but also backs up a $1 billion idea and tells us we’re on the right track to understanding how the universe works.

Space is pervaded by, well, space. It’s an invisible fabric that can stretch and shrink and warp and curve in multiple dimensions, even time — hence the official name spacetime.

Anything with mass warps the fabric, including you. Yet the denser and more massive an object, the greater the distortion.

Dense objects that move really, really fast can radically distort spacetime, some with enough energy to trigger ripples like a speedboat accelerating across a placid lake.

LIGO is an experiment that uses two L-shaped gravitational wave detectors: One is in Lousiana, and another is located thousands of miles away in Washington state.

These massive detectors are extremely sensitive, enough to detect mind-blowingly small disturbances of space, “much smaller than the size of the atoms the detector is built of,” he said.

Put another way, detecting a gravitational wave is like noticing the Milky Way — which is about 100,000 light-years wide — has stretched or shrunk by the width of a pencil eraser.

“LIGO will be three times more sensitive in three years, and we roughly expect to see 10s of events per year,” Bartos said.

That sensitivity could get even higher soon. LIGO wants to build a third instrument, but in the meantime it will get help from Europe’s new VIRGO detector (opening in late 2016) and Japan’s KAGRA facility (going online in 2017).

“The more [detectors] you have, the better your sensitivity, and the more stuff you will see,” Bartos said. “It becomes easier to weed out the things that happen here on Earth, like traffic and earthquakes” and find and pinpoint a signal.

The future for gravitational-wave astronomy is looking very bright, and the top researchers behind LIGO — possibly Kip Thorne and Ronald Drever of Caltech, and Rainer Weiss of MIT — are almost certainly going to win the Nobel Prize in Physics this year.