At least 24 killed after bomb attack in Turkey’s capital 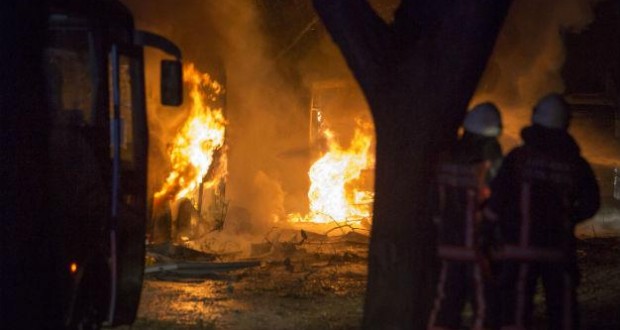 At least 24 people were killed and 61 others were injured in a bomb attack on Wednesday targeting shuttles carrying military personnel in the Turkish capital Ankara, Hurriyet Daily News reports.

Most of the injured are in good condition, Health Minister Mehmet Müezzinoğlu said.

The attack occurred in the center of the city, hundreds of meters away from the top military headquarters, parliament and prime minister’s office.

“We are looking into details of the explosion,” Turkish Prime Minister Ahmet Davutoğlu said.

The attack happened at a time when a high-level security meeting was being held at the Presidential Palace under President Recep Tayyip Erdoğan.

Prime Minister Ahmet Davutoğlu, who was scheduled to leave for Brussels later today, canceled his visit.

Meanwhile, the Turkish General Staff has strongly condemned the attack in a statement, saying that there were military personnel among the casualties.

The moment of explosion was caught on surveillance cameras near the scene.

The capital was already on alert after two suicide bombers killed 101 people on October 10, 2015 during a demonstration of peace activists near Ankara’s main train station, the bloodiest terror attack in the country’s modern history.