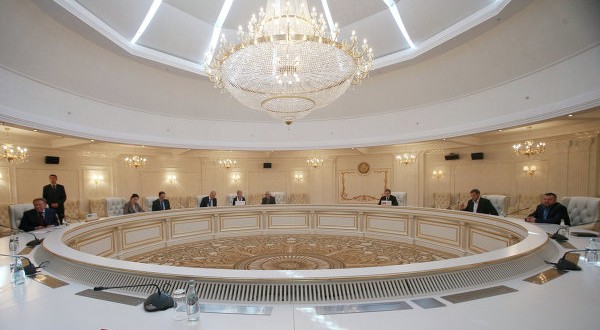 Parties expressed the deep concern of the systematic violation of the ceasefire on the part of individual areas of Donetsk and Lugansk regions.

The participants noted that militants increasingly used the prohibited heavy weapons in the ATO area. Also, the observers of the OSCE Special Monitoring Mission still do not have a full access to certain regions. Russia also continues to supply military equipment, arms and ammunition to Donbas.

“I emphasize again: without the implementation of the provisions on the safety of the Minsk agreements, it is impossible to proceed on resolving the situation. How can we provide the local elections in Donbas, rebuilding infrastructure, improving the socio-economic situation of the residents in the occupied areas in the conditions of a perpetual shelling and clashes,” – said the representative of Ukraine to the Trilateral Contact Group Leonid Kuchma.

It should be noted that Ukraine remains committed and is ready proceed on implementation of the Minsk agreements in full.

“The Ukrainian side is set to work out the modalities of local elections in Donbas in accordance to Ukrainian legislation, the OSCE standards and under the supervision of the OSCE ODIHR. Elections are a fundamentally important issue. At the same time, Ukraine can not solely provide the elections, because it requires a political will and constructive approach from Russia “, – wrote Olifer.

Special attention was paid to the issue of the hostages release.

“Ukraine insists on the admission of experts of the International Committee of the Red Cross to places of detention of Ukrainian hostages in some regions of Donetsk and Lugansk regions and on their release as soon as possible”, – wrote Olefir.