Shares
Turkish PM says a Syrian Kurdish militia is a terrorist organization and promised“all necessary measures will be taken against them”. He also warned Russia against using “terrorist group against the innocent people of Syria and Turkey” 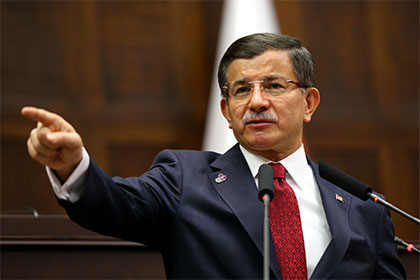 Turkish Prime Minister Ahmet Davutoglu blamed a Syrian Kurdish militia fighter working with Kurdish militants inside Turkey for a suicide car bombing that killed 28 people in the capital Ankara, and he vowed retaliation in both Syria and Iraq, Reuters reported.

A car laden with explosives detonated next to military buses as they waited at traffic lights near Turkey’s armed forces’ headquarters, parliament and government buildings in the administrative heart of Ankara late on Wednesday.

Davutoglu said the attack was clear evidence that the YPG, a Syrian Kurdish militia that has been supported by the United States in the fight against Islamic State in northern Syria, was a terrorist organization and that Turkey, a NATO member, expected cooperation from its allies in combating the group.

Within hours, Turkish warplanes bombed bases in northern Iraq of the Kurdistan Workers Party (PKK), which has waged a three-decade insurgency against the Turkish state and which Davutoglu accused of collaborating in the car bombing.

Turkey’s armed forces would continue their shelling of recent days of YPG positions in northern Syria, Davutoglu said, promising that those responsible would “pay the price”.

“Yesterday’s attack was directly targeting Turkey and the perpetrator is the YPG and the divisive terrorist organization PKK. All necessary measures will be taken against them,” Davutoglu said in a televised speech.

President Tayyip Erdogan also said initial findings suggested the Syrian Kurdish militia and the PKK were behind the bombing and said that 14 people had been detained.

Davutoglu also warned Russia, whose air strikes in northern Syria have helped the YPG to advance, against using the Kurdish militant group against Turkey.

“I’d like to warn Russia, which is giving air support to the YPG in its advance on Azaz, not to use this terrorist group against the innocent people of Syria and Turkey,” he said.

“Russia condemned yesterday’s attack, but it is not enough. All those who intend to use terrorist organizations as proxies should know that this game of terror will turn around like a boomerang and hit them first.”