Shares
On Monday at the meeting with the representatives of the Aspen Institute, Ukrainian President Petro Poroshenko sad that he would not allow an early parliamentary elections 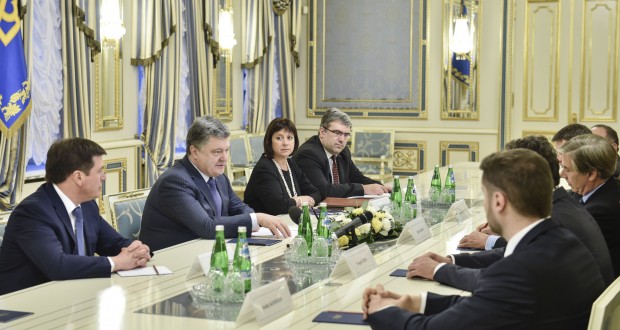 Ukrainian President said that the Parliament and the coalition should take responsibility of the reboot of the government today, Joinfo.ua reports with reference to the Presidential press service.
“The only thing I would like to emphasize is that I cannot allow early parliamentary elections to date. Despite their declarations, certain political leaders are trying to incite early elections. We have neither time nor necessity for that. We will not have a better Parliament and must learn to cooperate with this one,” – President Poroshenko said at a meeting with representatives of the Aspen Institute.

The recalled the words of former Minister of Foreign Affairs Hennadiy Udovenko that the key values for a politician should be honesty, professionalism and patriotism. “Unfortunately, some politicians add their ambitions and even insults to that. A true leader focuses primarily on the state interests,” the Head of State noted.

President Poroshenko said that first of all we need responsible, patriotic, professional and honest leaders today. He added that the implementation of reforms was the most important stage that should be formed by a team of responsible individuals who are able to implement the draft laws.