Shares
According to the Turkish Healthcare ministry, at least 37 people killed, 125 wounded people were hospitalized after an explosion hit central Ankara on March 13. Police detained 12 people in Turkey's northwestern province of Eskişehir and 2 people in Istanbul 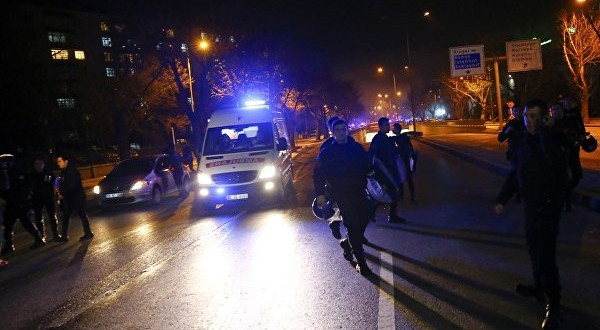 A bomb-laden car caused the blast, Interior Minister Efkan Ala said at the same conference after a security meeting in Ankara, Joinfo.ua reported with reference to Hurriyet Daily News.

Thirty people were killed at the scene of the incident while four others died on their way to hospital, Health Minister Mehmet Müezzinoğlu has said in a press conference, adding that at least one of the 30 was one of the assailants.

On March 14, the health minister announced that three more people had also succumbed to their wounds.

Nineteen people are in critical condition, while seven were in surgery, he said. Interior Minister said they would have more information about the perpetrators of the attack by March 14. The area was evacuated as a precaution against a second attack.

The blast took place where around 10 bus stops are located.

According to Reuters, a female member of the outlawed Kurdistan Workers Party (PKK) was one of two suspected perpetrators.

Dogan news agency reported also that 12 people in Turkey’s northwestern province of Eskişehir and 2 people in Istanbul were detained within the investigations over the attack.

The suspects have been making “propaganda of the terror organization” and have been in “different acts” in this regard, said Eskişehir Mayor Güngör Azmi Tuna.

President Recep Tayyip Erdoğan condemned the attack in a written statement, adding that “Turkey has become a target of terror attacks due to the instabilities in the region.”

Turkey will continue its determined fight against terrorism, he said.

“Terror attacks – which intend to target the integrity of Turkey, unity and solidarity of our people – do not diminish our will to fight against terror, but further boost it,” he added.

It should be recalled that ISIS militants bombed a peace rally near the Ankara Railway Station, leaving at least 103 dead on October 10, 2015.